PIG OUT – meaning and examples

To pig out is an informal phrasal verb.

It has the following meaning:

(intransitive) It means to eat too much of something or to eat excessively. It gives the idea of eating in excess and that you can’t eat any more food.

A result of pigging out is that often feel you cannot move or sometimes you feel sick from eating too much.

Pig out vs. Pig out on

There are two ways of using this phrasal verb.

To pig out (without mentioning food)

I didn’t mention what I ate so just pig out is used.

But if I mention the food, we say pig out ON then the name of the food.

I specify what I ate, the pizza, so we used pigged out ON pizza.

Notice how pigged out and pigging out have two Gs. We use a double G in its past tense and continuous tense form.

What type of food?

When you pig out on something, this something is mostly unhealthy food.

As we saw in the last example I pigged out on pizza, which isn’t considered healthy.

You are not likely to pig out on a salad because one, it is healthy and two, it is hard to have a full stomach just by eating salad.

Example sentences of PIG OUT

Now it is your turn to give an example.

What type of food do you like to pig out on? 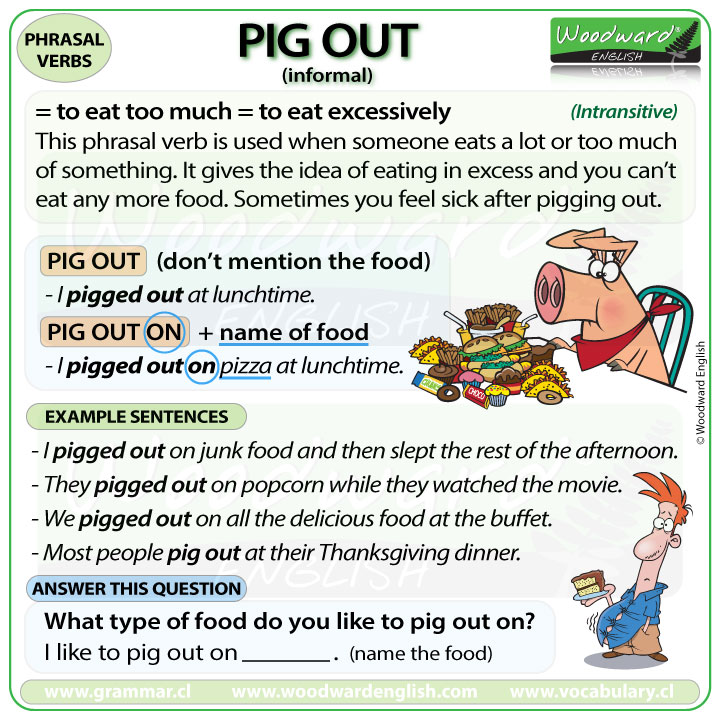