Parts of the Eye – English Vocabulary

Parts of the Eye Vocabulary in English

Here are 7 words associated with the eye:

eyes (noun): the round (globular) organs in your head that you use to see with.

eyelid (noun): the pieces of skin above and below the eye that cover it when you close your eyes. The eyelids are there mainly to cover and protect your eyes.

eyelashes (noun): the hairs growing on the edge of the eyelids.

Some ladies use false eyelashes which are artificial eyelashes that are stuck to the eyelid with an adhesive.

There is an expression which is To flutter your eyelashes.

eyebrow (noun): the line of hair above each eye.

pupil (noun): the small round black area at the centre of the eye. It varies in size to regulate the amount of light reaching the retina at the back of the eye.

Did you know that pupil can also mean a child at school?
The word pupil meaning student is becoming old-fashioned which means it is not used as much nowadays.

iris (noun): the round colored part that surrounds the pupil of your eye. The iris is responsible for controlling the size of the pupil.

What color are your eyes?

retina (noun): the layer at the back of the eye which is sensitive to light and that receives the image you see and sends it to the brain.

Extra vocabulary associated with the eye

cornea (noun): The transparent slightly bulging surface in front of the eye.

optic nerve (noun): The optic nerve connects the eye to the brain. The job of the optic nerve is to transfer visual information, via the impulses formed by the retina, to the vision centers of the brain.

sclera (noun): the white outer layer of the eye. It is often know by the common name of “The white of the eye” 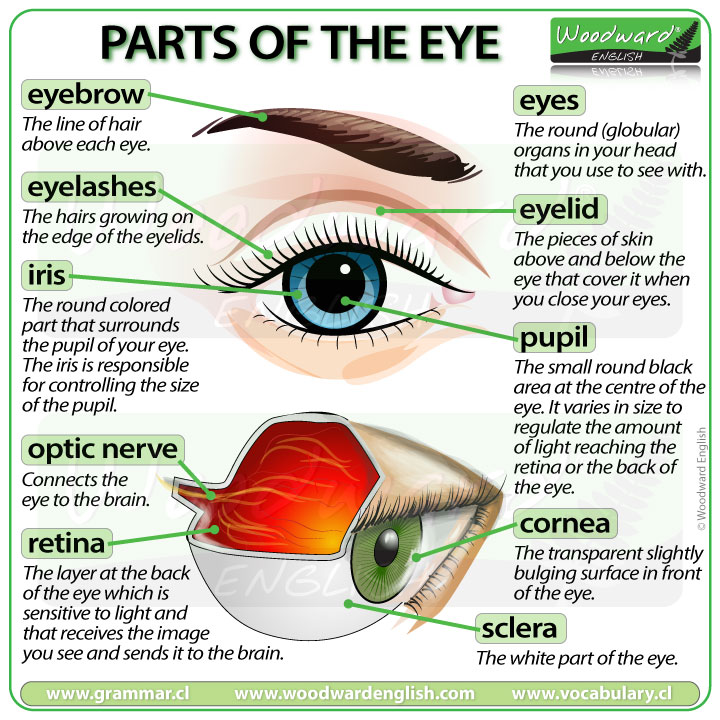