Parts of the Hand – English Vocabulary

Parts of the Hand Vocabulary in English

Here are 7 words associated with the hand:

little finger / pinky (noun): the smallest finger on the hand. Pinky is an informal name for the little finger.

A pinky promise is when two people touch their pinkies to signify an unbreakable promise has been made. Sometimes it is called pinky swear.

Another expression is to wrap someone around your little finger. This means you have gained control over someone and you can get them to do anything you want.

What? You wanted me to mention that Little finger is also a character in Game of Thrones? Nah, I’m not going to do that.

ring finger (noun): the finger that is next to the little finger. It has this name because this is the finger on which a wedding ring is traditionally worn.

middle finger (noun): this is typically the longest finger that is in the middle of the hand and the other fingers.

It is considered an insult when you only show your middle finger towards someone. And since we are such wonderful human beings we don’t do that type of vulgar thing.

index finger (noun): The first finger next to your thumb. It is sometimes called the forefinger. You can use the index finger to point, to press things, to pick your nose… it has many uses.

thumb (noun): the thick digit that is set lower and apart from the four fingers. A thumb is different from a finger in that a thumb only has one joint, while a finger has two joints.

fingernail (noun): the thin hard area at the top end of a finger. Many times they are just called nails.

The ones on you feet are not fingernails, they are called toenails.
Do you bite your nails?

What do some people put on their fingernails? Nail polish
Nail polish is a type of colored liquid that is painted on fingernails and toenails.

knuckles (noun): the joints that connect fingers to the rest of the hand. The joint of the knuckle allows me to move my finger up and down.

Some people crack their knuckles which means to move you fingers in a way that the knuckles make a noise.

Wrist (noun): The joint between the hand and the arm.

Palm (noun): the inner surface of the hand that is between the wrist and the fingers.

Fist (noun): a person’s hand when the fingers are curled in towards the palm and held there tightly. This is typically done when someone wants to hit someone or something. 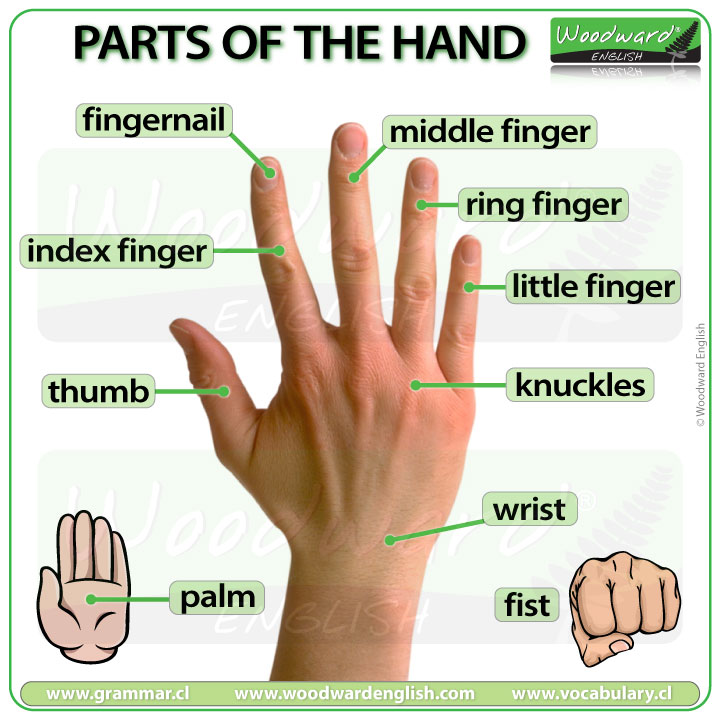