pencil (noun): an instrument used for writing or drawing. Typically the middle part is made of graphite, which some people call lead (in reality it is not lead). This graphite is traditionally surrounded by wood or nowadays also by a plastic or metal case.

Sometimes pencils are of different colors. These are called colored pencils or coloring pencils.
And when you make a mistake with a pencil, you can make a correction with an eraser also known as a rubber.

eraser / rubber (noun): a small piece of rubber (or similar substance) that is used for removing pencil marks from paper.

The associated verbs are To erase and To rub out. Rub out is a phrasal verb.

pencil sharpener (noun): a device for sharpening a pencil by rotating that pencil against a cutting blade or edge.

Sharpener comes from the verb To sharpen which means to make something sharp. Sharp is to have a fine edge or point. The opposite of sharp is blunt.

pen (noun): an instrument used for writing with ink. Ink is the liquid inside of a pen and it leaves a more or less permanent mark on paper.

The ink in pens comes in different colors but the most traditional is blue.

What is the difference between a pen and a pencil?

A pen has ink and can leave permanent marks.
A pencil has graphite and you can use an eraser to change what you have written.

highlighter (noun): a special pen used for marking words in text with a transparent fluorescent color so they stand out from the rest of the text.

The classic highlighter is the yellow one though you can get them in different colors.
What color highlighter do you like to use more?

scissors (noun): an instrument used for cutting paper, cloth, etc. It has two blades fastened in the middle with handles at one end.

Note, we say a pair of scissors even though it refers to “one” of them.
See the video to practice the pronunciation of scissors.

glue stick (noun): Glue is a sticky substance used for joining two things together, usually paper. It can come in liquid form (glue) or as a solid stick in the form of a tube (glue stick).

Note, we say a pair of scissors even though

In a pencil case, you may sometimes find:

a ruler – to measure how long something is.
correction fluid – a white liquid used to cover mistakes written by pen.
a protractor – an instrument, typically made of transparent plastic, used for measuring angles.
a calculator – a small device used to help make mathematical calculations.
adhesive tape – a clear plastic tape which is sticky on one side which is used for sticking things together. Sometimes this is called by its trademark name of Scotch tape (American English) or sellotape (British English).

What do you keep in your pencil case? 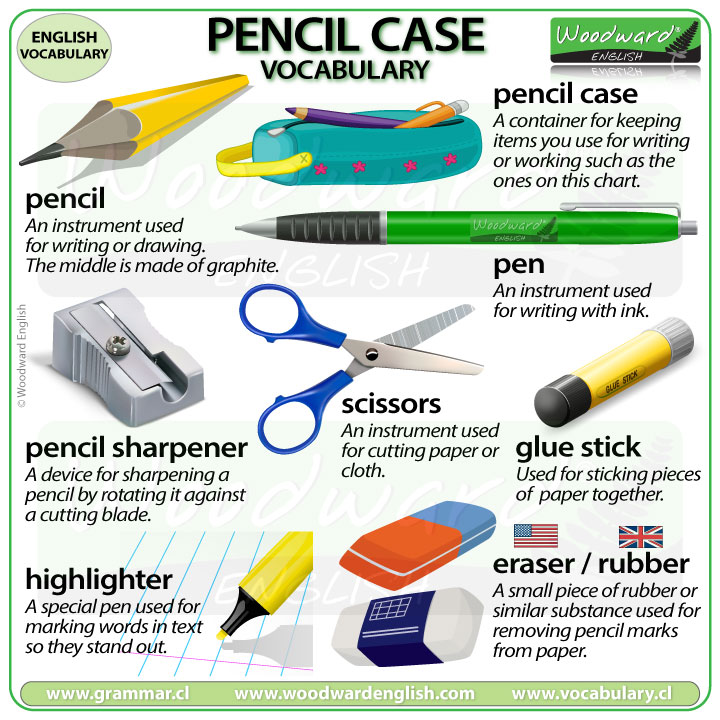