Stages of Childhood Vocabulary in English

Here are 7 words to describe the different stages of childhood:

newborn (adjective/noun): a recently born child or animal. You can use newborn for the first month or two.

infant (noun): a baby or very young child up to the age of 1 year old.

toddler (noun): a child that is between 1 and 3 years old.

The word comes from the verb to toddle which means to walk unsteadily, like a child usually does at this age.

A toddler has normally just learnt how to walk so they often get into trouble as they discover the world. In fact we have an expression in English called the terrible twos.
The terrible twos is supposedly when a child or toddler reaches the age of 2 and they tend to try and test their parents by crying more or throwing a tantrum.
A tantrum is a sudden uncontrolled outburst of anger and frustration, typically of a young child.

preschooler (noun): a child between the age of three and five. It is the stage just before they enter school.

The word comes from preschool which is a type of school for children between the ages of around three and five. Sometimes it’s called kindergarten. Note the word can be written with a hyphen as in pre-schooler.

child (noun): a young human who is not yet an adult. Typically they are called a child up to the age of 12 and after that they are usually called teenagers.

Remember the plural of child is children.
One child …. two children.
There is no S at the end of children.

An informal word for child is kid.

teenager (noun): a young person between the age of 13 and 19. The name comes from the last part of those numbers thirTEEN, fourTEEN… nineTEEN.

The word comes from the end of the numbers… thirteen, fourteen… nineteen,

childhood (adjective/noun): the period of time in your life when you are a child… or some of you are currently at that stage…. enjoy it… enjoy your childhood. There is plenty of time to be an adult later. 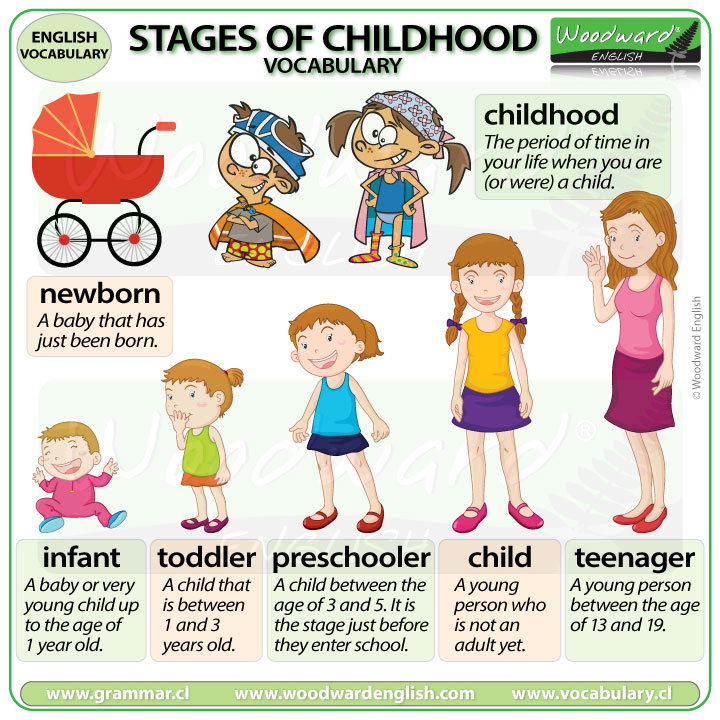