The window – A short story with vocabulary

This is a version of Allan Seager’s “The Street,” first published in the London Mercury in 1933 and republished in Vanity Fair in 1934.

The Window – A short story

There were once two men, both seriously ill, in the same room of a great hospital. Quite a small room, it had one window looking out on the world. One of the men, as a part of his treatment, was allowed to sit up in bed for an hour in the afternoon (something to do with draining the fluid from his lungs).  His bed was next to the window. But the other man had to spend all his time flat on his back.

Every afternoon when the man next to the window was propped up for his hour, he would pass the time by describing what he could see outside. The window apparently overlooked a park where there was a lake.  There were ducks and swans in the lake, and children came to throw them bread and sail model boats. Young lovers walked hand in hand beneath the trees, and there were flowers and stretches of grass, games of softball, and at the back, behind the fringe of trees, was a fine view of the city skyline.

The man on his back would listen to the other man describe all this, enjoying every minute. He heard how a child nearly fell into the lake, and how beautiful the girls were in their summer dresses. His friend’s descriptions eventually made him feel he could almost see what was happening outside.

Then one fine afternoon, the thought struck him: Why should the man next to the window have all the pleasure of seeing what was going on? Why shouldn’t he get the chance? He felt ashamed, but the more he tried not to think like that, the worse he wanted a change. He’d do anything!  One night as he stared at the ceiling, the other man suddenly woke up, coughing and choking, his hands groping for the button that would bring the nurse running. But the man watched without moving – even when the sound of breathing stopped. In the morning, the nurse found the other man dead, and quietly took his body away.

As soon as it seemed decent, the man asked if he could be switched to the bed next to the window.  So they moved him, tucked him in, and made him quite comfortable.  The minute they left, he propped himself up on one elbow, painfully and laboriously, and looked out the window.

It faced a blank wall. 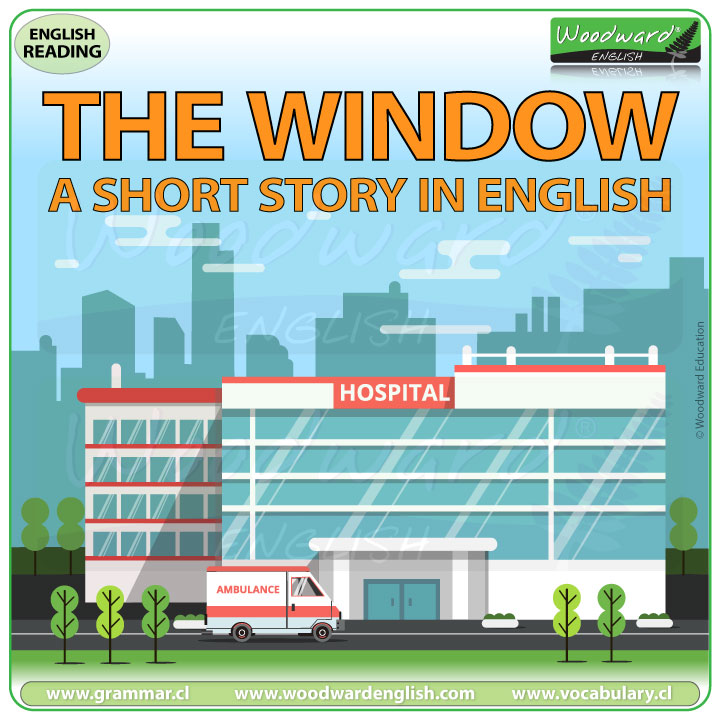 Ill = sick
Quite = to some degree or level; fairly
Treatment = something that is done to cure an illness or injury
Allowed = permitted
To drain = to remove liquid from something
Fluid = liquid
Lungs = the organs in the chest that you use for breathing
To spend time = to use your time doing something.
Flat on your back = to be on your back in a completely horizontal position.
To prop up = to prevent something from falling by putting something under it to support it.
Apparently = according to what you have heard, read or the way something appears.
To overlook = to see a place from a higher position. E.g. a building overlooking a park.
To overlook also means to fail to see or notice something (which is not the meaning in this story)
Swans = a large bird with a long, thin neck. They are usually white (though sometimes black) and live on or near water.
To sail = to travel on water, typically using sails
A sail = a large sheet of cloth on a boat that helps make the boat travel on water. This is done by using the force of the wind that blows against the sail to propel the boat forward.
Model boats = a much smaller version of a real boat used as a toy.
Hand in hand = when two people are holding each other’s hand. (Notice the preposition IN … you also have: arm in arm)
Beneath = under
To stretch = to make something longer or wider, usually by pulling on it.
Stretches of grass = large areas of grass
Fringe = The (straight) line of hair that hangs over the forehead. In American English they are called bangs.
Fringe of trees = a line of trees of the same height.
City skyline = the outline of buildings seen against the sky.
Nearly = almost
Thoughts = the things you think (in your head)
To strike = to hit with force
The thought struck him = He suddenly thought
Ashamed = embarrassed
Ceiling = the top inside surface of a room. The opposite of floor.
To cough = to force air out of the throat suddenly and noisily.
To choke = to not be able to breathe because the passage to your lungs is blocked.
To grope = to try and reach or find something that you cannot see by feeling around with your hands.
To switch = to change
To tuck in = to make someone feel comfortable in bed by pulling the bedcovers around them, usually making sure the sides of the bedding are folded under the mattress
Elbow = the joint between the upper and lower parts of the arm. This is where your arm bends in the middle.
To face = to be opposite something or someone. To be positioned in front of.