How would you describe yourself in three words? Question 14

VIDEO COMING AFTER THE LIVE CONVERSATION ON YOUTUBE – COME AND JOIN US!

How would you describe yourself in three words?

When you describe yourself, you can give a physical description or a description of your personality or character.

In this lesson we are going to talk about vocabulary associated with personality.

When you are giving a description you will use adjectives because adjectives are for describing or giving more information about something or someone.

Let’s looks at some adjectives to describe people:

Some examples of positive adjectives to describe someone’s personality (or character) include:

See our full list of 101 positive adjectives to describe personality and character traits.

What do each of these adjectives mean?

Some examples of negative adjectives to describe someone’s personality include:

What do each of these adjectives mean?

What problems have you had with this type of personality?

When answering this question, try and give more complete answers. Don’t just give three words like curious, creative and generous. Give more information.

Describing yourself in job interviews

Describe yourself in three words…. This is a typical question in job interviews. Why?

The interviewer wants to know more about your personality to try to figure out how your mind works and what values or characteristics you have. They may be able to draw a conclusion as to your work style with the response you give. Maybe they ask to see if you will fit in with the company culture.

Mainly they are looking for qualities that will set you apart from the other job candidates (who may all give the same response to this question – hardworking, proactive, problem-solver) so preparing your response in advance could give you an advantage.

Think of words that will add value to the position or company.
Again, it is important NOT to just give three words. Elaborate and explain WHY you consider yourself in that way.
Also, avoid describing yourself with words or information that are irrelevant to the job. For example, your future boss doesn’t need to know that you are great a karaoke (unless that is the job you are applying for)

The interviewer may also ask this same type of question in a different way, for example:

They may also ask you to say a negative quality you have. Remember, nobody is perfect!

How would you describe yourself in three words? 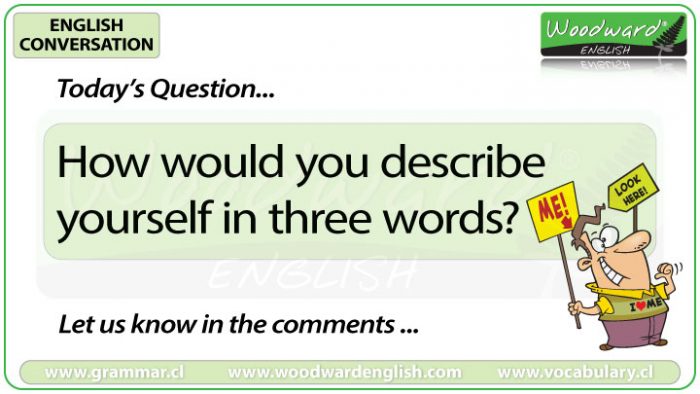