Verbs in English can be divided into two groups:

Transitive verbs require an object to complete their meaning.

Imagine that I say:

This sentence is incomplete. There is information that is missing.

You are probably wondering what I need.

Why is this sentence incomplete?

Now the sentence is complete and we can understand it. We added the object “a dictionary” after the verb.

We can see that transitive verbs need an object after them.

If someone says: “I’m looking for”

My keys is the object (that you are looking for). Now the sentence is clear.

We need to add an object to make the sentence complete.

Now look at this sentence.

The object appears after the transitive verb as we have seen so far.

However, sometimes the object goes in the MIDDLE of the transitive phrasal verb. For example

Both sentences are correct.
With some phrasal verbs you can put the object in the middle but that is not always the case.
We will see more about the position of objects with phrasal verbs in another lesson.

Intransitive verbs cannot have a direct object after them.

The subject is doing the action of the verb and nothing receives the action. An intransitive verb does not pass the action to an object.

Here we cannot have an object after the intransitive verb smile.

You cannot “smile something” (incorrect).

An intransitive verb expresses an action that is complete in itself and it doesn’t need an object to receive the action.

Broke down in the past tense of break down. Break down means to stop working.

You cannot “break down something”. Break down is an intransitive phrasal verb.

You cannot “sit down something”.

Phrasal Verbs that are Transitive and Intransitive

Some phrasal verbs can be both transitive and intransitive.

You need to be careful. Sometimes the meaning of a phrasal verb changes depending on whether it is transitive or intransitive. Let’s look at the following example:

Take off (transitive) = to remove something

Take off (intransitive) = to leave the ground and begin to fly

He took off, the past of take off, is transitive so it needs an object, in this case his tie. Since there is an object after take off, we know the meaning can be to remove something. So, he removed his tie when he got home.

In this case take off is intransitive and has a different meaning. The meaning of leaving the ground in order to fly.

You can see that here, there are two different meanings (or uses) of “Take off”. When take off is transitive it means to remove something (that something is an object). When take off doesn’t have an object after it, it is intransitive and can mean to leave the ground.

Also note that the same phrasal verb, for example take off, can have more than one meaning (yes, even 7 or 8 different meanings).

A good dictionary will tell you whether a verb is transitive (usually vt. or tr. next to the verb in dictionaries) or intransitive (vi. or intr.) 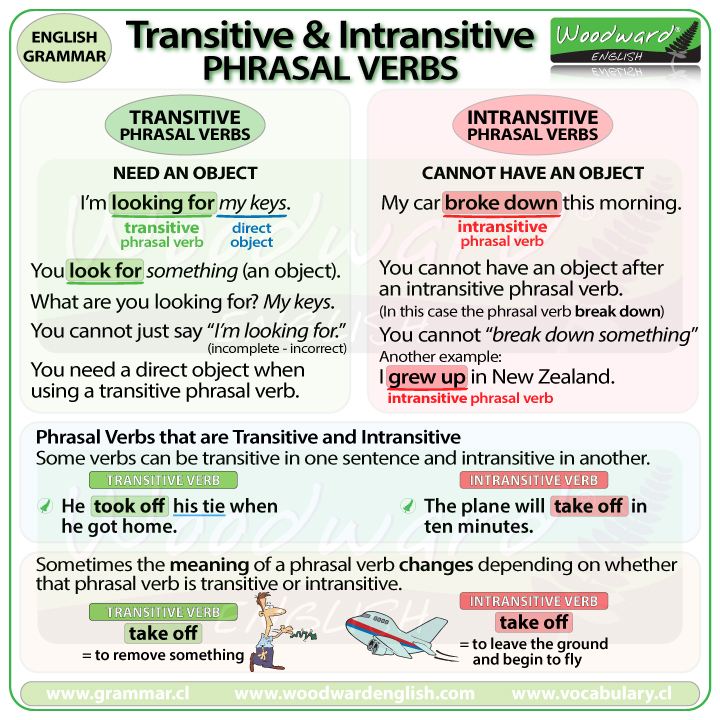