The plural of CHILD + The difference between Child, Child’s, Children, Children’s

A child is a young person. A child is not an adult yet.
An adult is a person who is 18 years old or more.

Today we are going to look at the word CHILD.

Child is a singular noun. There is only ONE of something. ONE child.
An example sentence:

Child is singular. Child refers to ONE… one child is playing

What is the plural form of child?

BUT sometimes there is an apostrophe S after child and children…

When there is an apostrophe S after a noun, they are known as possessive nouns.

The apostrophe S is used to show possession or that someone has something.
For example:

Child’s means one child has something. (That something comes next in the sentence.)
Children’s means two or more children have something.
Let’s see some examples:

Since child is singular, child’s toys means “the toys of the child.” … one child has toys.

Since children is plural, children’s toys means “the toys of the children.” … two (or more) children have toys.

What does kid mean?

There is another word used instead of child… KID.
Note: Kid is informal.

Kid is a singular noun so it refers to ONE child.
You can say:

The last sentence is more informal.

So, if child and kid are singular nouns, what is the plural form of these words?
The plural of child is children.
The plural of kid is kids.

Kid is a regular noun so we just put an S at the end to make it plural.
One kid, Two kids. Yes, kids (in plural form) is also informal.
Let’s see our example sentences. 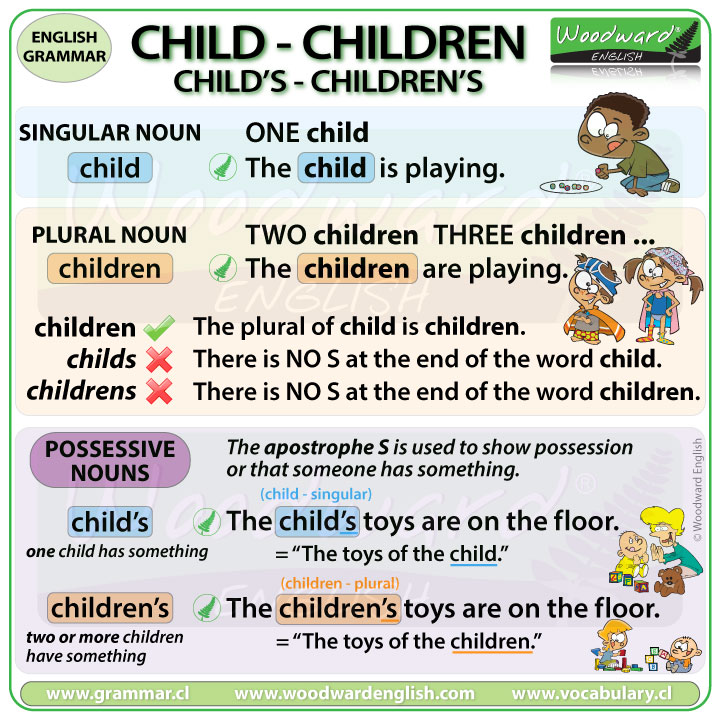 See more about when and how to use the Apostrophe S in this lesson:
Apostrophe S – Possessive Nouns