Look at these three short sentences.

What do they have in common… apart from the name John?
They all have an apostrophe S at the end of John.

What does an apostrophe S mean?
The apostrophe + s has 3 different meanings in English:

When an apostrophe S is followed by an adjective like in the first example:

then the apostrophe S is a contraction of IS.

John’s tall is a short way of saying John IS tall.

When an apostrophe S is followed by a past participle like in the second example:

then the apostrophe S is a contraction of HAS.

John’s studied is a short way of saying John HAS studied.

Remember that regular past participles end in -ED.
A sentence with HAS + Past Participle is in the present perfect tense.

When an apostrophe S is followed by a noun like in the last example:

then the apostrophe S is used to show possession or that something belongs to someone or something.

We don’t say “the car of John” as you do in some languages. No, in English we use the apostrophe S.
We say John’s car which means that the car belongs to John.

John’s, with an apostrophe S, is called a possessive noun. 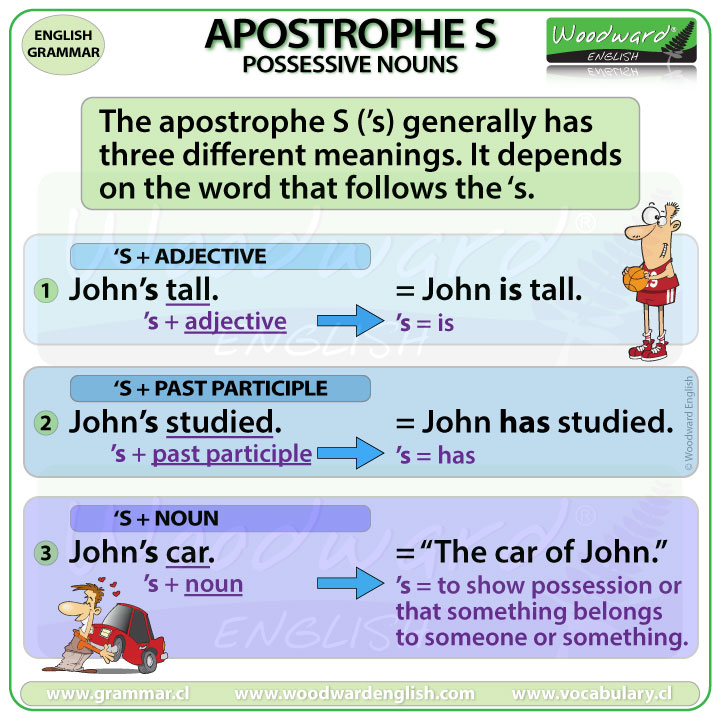 In this lesson, we are going to look at possessive nouns and how to use the apostrophe S.

A possessive noun, which contains an apostrophe S, is used to show possession or that there is a relationship between two things or that something belongs to someone or something.

Look at the example:

Instead of saying “the house of Paul” in English we use the apostrophe S to show that the house belongs to Paul.
Here are some more examples:

The book belongs to Julie. Julie is the owner of the book. We don’t say “the book of Julie”, no we say Julie’s book.

It is the party that Mike is having.

Susan obviously doesn’t own her parents. The apostrophe S can show a relationship between different people or things. Here Susan’s parents refers to “the parents of Susan.”

Paul’s, Julie’s, Mike’s, and Susan’s are all possessive nouns.

Now, there are some simple rules about how to use the apostrophe S.

Singular Nouns NOT ending in S

When we have a singular noun, we just add an apostrophe S like we have already seen. For example:

Ange is a singular noun, the name of a person, so we just add an apostrophe S to the end of her name which becomes Ange’s. Ange’s house means the house belongs to Ange.

We are talking about one friend (a singular noun) and his or her bike. The bike that belongs to your friend.

Dog is a singular noun so we just put Apostrophe S after it. It refers to one dog owning or having one bone.

BUT what happens if there is more than one dog? When there are two dogs, we say:

The rule is: Plural nouns ending in S… we only add an apostrophe.

We only have an apostrophe after the S in dogs because dogs is a plural noun ending in S. We cannot say: Where are the dogs’s bones? No, this is NOT correct.

Dogs’ bones, with only an apostrophe after the S, means… the bones of the dogs (dogs plural).

Compare these two sentences. Pay attention to the position of the apostrophe:

There is NO difference in pronunciation between dog’s and dogs’.
So when someone is speaking, how do we know if they are talking about one dog or two dogs? It depends on the context.

Let’s look at another example:

How can I write that my two friends have a house? You would write:

Friends is a plural noun ending in S so we just add an apostrophe to the end.
We don’t say friends’s house … No, this is NOT correct.

So the rule is… Plural Nouns ending S. We only add an apostrophe to the end and NOT an extra S.

This is the same as saying: “permission from your parents.” … both parents, not just one parent.

This is the same as saying: “the toilet of the girls” or in some countries it is called the bathroom or restroom instead of toilet.

Since, dogs, parents, and girls are all plural nouns that end in S, we only add an apostrophe to the end.

Plural nouns that do NOT end in S

Now, not all plural nouns end in S.

For example, child is a singular noun. We can say:

How can we say the same thing but referring to more than one child?
The plural of child is children. So our sentence is now:

Yes, children is a plural noun but it does NOT end in S, so we just add an apostrophe S to the end.
Children’s toys means the toys of the children.

Remember, the plural of child is children, NOT childrens.

So the rule is: Plural nouns NOT ending in S… we add apostrophe S.

This refers to the camping trip of the children.
(Child is singular. The plural of child is children.)

This refers to the grammar of different people.
(Person is singular. The plural of person is people.)

This refers to the toilet for the men, that is used by men.
(Man is singular. The plural of man is men.)

The fun part comes when we have singular nouns ending in S.

This means the project of the class.The entire class had one project to do together. Class is a singular noun.

Did you hear how I added a final /iz/ syllable to the end? (listen to the video to hear this)
This extra syllable is added to singular nouns ending in S when we have added the apostrophe S.
But what happens when are talking about two classes. The plural form of class is classes.

How would we write the sentence now if we are talking about the projects of both classes? We would say:

We just add an apostrophe to the end because classes is a PLURAL noun ending in S.
This refers to the projects of the classes, the different classes.
Also note that we don’t say classes’s. It is a plural noun that ends in S so just the apostrophe is added.

So the rule is: Singular nouns ending in S… we add apostrophe S.

All of these nouns, class, princess, and boss end in S but they are singular nouns, so we just add the apostrophe S at the end.


Names of people that end in S

What happens with the names of people that end in S like James or Lewis or Jones?

Grammarians are divided between adding an apostrophe S or only the apostrophe.
You may see it written in the following ways:

Both forms are correct though the first one seems more common. My personal preference is using apostrophe S as in the first example because in spoken English we add the additional syllable of /iz/ at the end.

But with classical or religious names ending in S, we only add an apostrophe:

Apostrophes with two or more people

When we are talking about two or more people, we add an apostrophe S or only an apostrophe depending on the rules we have already seen.

If there are two owners of something, we only add ’s to the final name.

Both Stacy AND Steve are joint owners of the same car so we only add ’s to the final name, in this case Steve.

This way we see there are two owners of two different cars.
Notice how the verb is in plural form because we are talking about more than one car.

No noun after apostrophe S

Usually we don’t put the noun (or object) after the ‘s to avoid repetition, especially when the meaning is clear.

The same applies when answering a question:

You don’t need to say: “It is Mary’s umbrella” because it is obvious we are talking about the same umbrella. The meaning is clear. Saying umbrella again is not necessary and sounds repetitive.

This is the same as saying my brother’s shoes, but without sounding repetitive.

Means: Is it your sister’s dress? 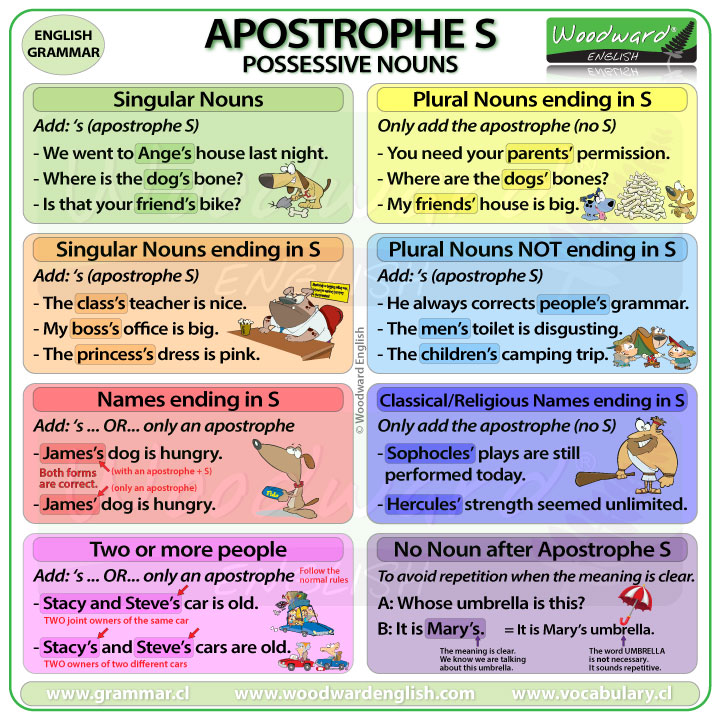 Apostrophe S with periods of time

The apostrophe S can also be used with time periods.

BUT BE CAREFUL!!!
We do NOT use an apostrophe with decades or years.

Plural forms of Acronyms – No Apostrophe

We also do NOT use an apostrophe S as the plural form of an acronym. 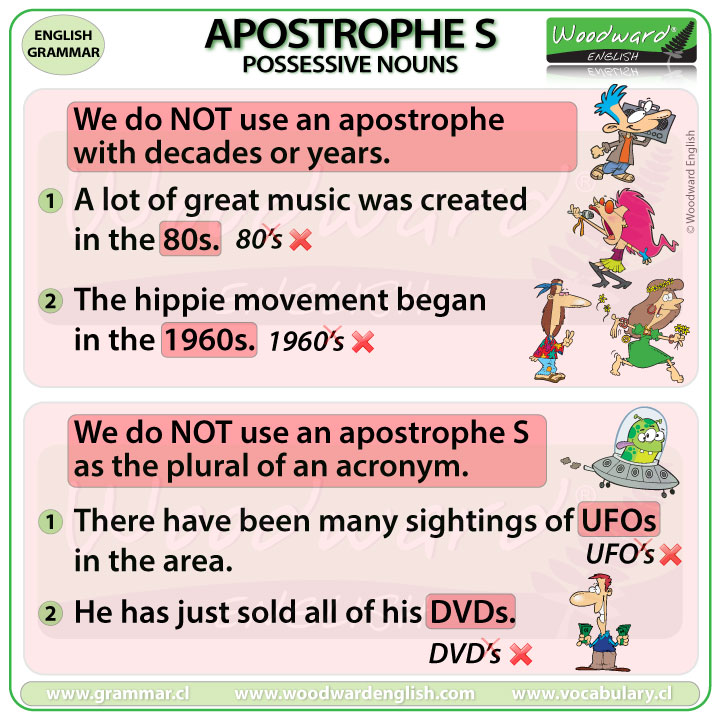 Also, you can try these practice exercises: