Being able to use prepositions correctly is an important part of Writing Task 1 of the Academic version of the IELTS exam.

In this lesson we are going to learn when to use AT, ON, IN, BY, TO, and other prepositions correctly.

Let’s look at the words increase and decrease. They can be used as a noun or a verb.

It is important to know the difference of whether it is a noun or a verb because the preposition that comes after it will be different. For example:

Increase and Decrease as Nouns

As nouns, increase, decrease, rise and fall normally have the preposition IN after them ….. when we do NOT specify a number.

Here I don’t specify any amount, or quantity, or numbers associated with the increase or decrease.

The moment we include a number or specify a number, we use the preposition OF after the noun increase or decrease.

In this example you could also change the order a little.

Notice how the percentage number goes before the noun increase and we now use the preposition IN because there is no specific number after it.

Increase and Decrease as Verbs

When increase and decrease are verbs, they normally have the following prepositions after them:

Increase FROM X (the first amount) TO Y (the final amount).

To show this difference we can use the preposition BY.

Increase (or decrease etc.) + BY + the amount of change.

BY = the amount of change between two different periods of time or values.

When we use a percentage instead of another number, the preposition BY is optional.

(Both example sentences above are correct)

Let’s look at the following sentences:

We have a different preposition in each sentence and they both change the meaning of it significantly. Let’s see how…

What is the difference between these two prepositions if the starting point is 100%?
It declined BY 5% means it only drops a small amount from 100% to 95%

It declined TO 5% means it fell from 100% all the way down to 5% which is a huge drop.
We use TO because we are talking about the end point, in this case the end point is 5%.

Sometimes we don’t use the FROM part as that number has already been mentioned in a previous part and we just use the Preposition TO to mention the end point.

When we talk about specific months or years, we use the preposition IN.

We use BETWEEN X AND Y when we want to show a range of time, which means it has a start time and an end time.

We can use SINCE when we have a starting point and the trend continues until now. SINCE is mostly used with a perfect tense.

We use SINCE because the prices continue to increase until today.

See our lesson about the difference between FOR and SINCE.

After verbs that start and end, we mostly use the preposition AT before a number:

When the trend remains constant or steady, we can also use the preposition AT:

Notice how in the first part we said: over the last decade.

We use OVER and DURING with a time period

Let’s look at this simple graph to apply many of the prepositions we have talked about.

What is the direction of this trend? 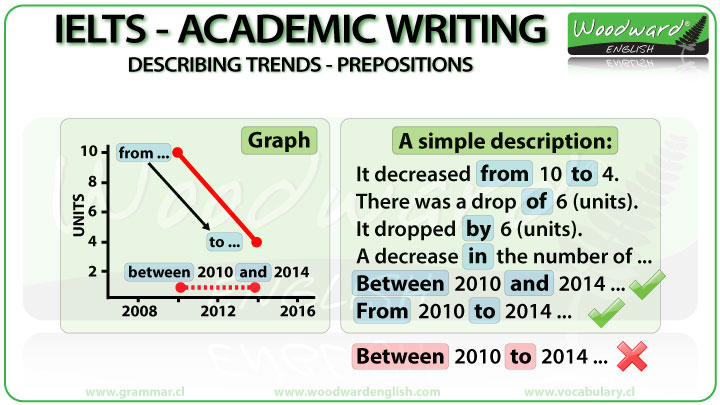 It goes down. So to describe this trend we could use a word like decrease or drop or decline.

For now we will say… it decreased. It could be sales decreased, production decreased, it could be many things. At the moment I’m interested in the prepositions that come next.

What is the starting point? 10 units.
What is the end point? 4 units.

So we could say:

Now, what is the difference between 10 and 4. It is a difference of 6 so we could say:
There was a drop, or decrease, or decline, OF 6 units.

We use OF after a noun, in this case the noun drop.

How about if we use the verb form of drop. We would say:

Notice how we use OF after the noun form of drop, and BY after the verb form of drop when showing the change or difference between two numbers.

But if we do not include a specific number, we use the preposition IN after the noun.

Here we haven’t specified a number.
We don’t know if it 6 or 6 million. We just know there was a drop or decline.

Now compare the two together:

… and then sales, units, or whatever

If we look at the chart again, what is the time period that the decrease happens?

The decrease happens from one date to another date. Those two dates, or years, are 2010 and 2014. Even though those numbers don’t appear written on the graph, we can see the time intervals in the bottom axis are divided into two-year periods.

For time periods that include two dates, we can say:

Let’s look at another simple graph: 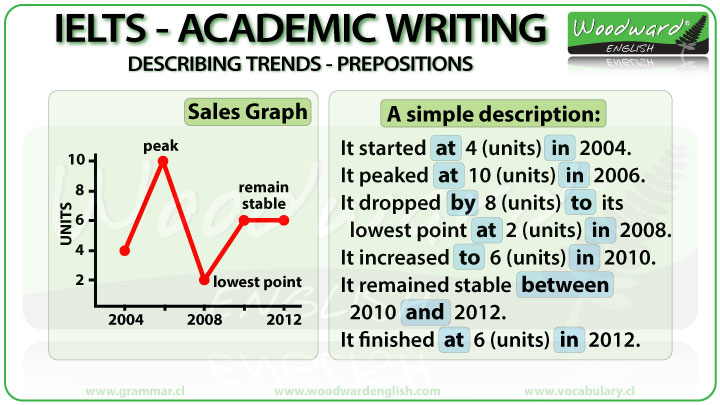 When does this graph start?

We use IN because we are talking about something that happened in a specific year… in 2004.

And what happened then?
Something started. Let’s imagine it’s talking about sales of computer units.

So what preposition is used as a part of the simple description?

Then what happened? Sales increased.

They increased TO its highest point.

This highest point is called a peak. Peak can be a noun or a verb. Let’s use the verb:

We use the preposition AT after the verb PEAK.

We could also add the time the peak happened… in 2006.

Of course if we say:

This sounds repetitive. We are just doing these simple descriptions to learn the correct prepositions.

That shows the examiner you can vary your vocabulary.

Then what happened after it peaked?
We can see that sales went down. Sales dropped.

How much did it drop?

Why do we use BY in this case?

To show this difference we use the preposition BY. It dropped by 8 units.

We could also say it dropped TO two units though saying “to two” together sounds strange.

The sales of only two units that year was the lowest amount that was sold, which makes it its lowest point.

So bringing it all together we say:

You see we also added IN + the year to state when this lowest point happened, IN 2008. So the complete sentence is:

Then what happened?
We can see the trend going up.
Sales increased again, this time TO 6 units.

We use the preposition TO after the verb INCREASE when referring to increasing to a number.

Then we can see it didn’t make a change up or down. It remained stable or constant.

See how we used the prepositions BETWEEN x AND y …

Another alternative is to use the prepositions …. FROM x TO y.

So, where does the graph finish?

We use AT with the verbs finish and end. Just like you start at … you finish at.

This was a simple overview of common prepositions you will be using in Writing Task 1 of the Academic Version of the IELTS exam. I recommend seeing our other lessons about prepositions in general.