Here we used an adjective + enough.

What does enough mean?
Enough can mean sufficient or sufficiently or as much as required or needed.

But here it says NOT enough.
Not enough can mean less than necessary, less than sufficient.

Max is not old enough means he doesn’t have the necessary age. His age is less than sufficient.

In this lesson we are going to look at the word ENOUGH and its meanings, uses and correct position in a sentence.

As we have seen, enough appears AFTER an adjective.

Here we are saying the coffee is not sufficiently hot.

The volume is not the sufficient level for me to be able to hear it.

This means he didn’t have sufficient experience for the job.

Here enough is used in a positive way. It doesn’t have NOT before it, so it means the room has the sufficient space for all of the students. The space that is necessary.

Note: We don’t say enough hot or enough loud or enough experienced or enough large.
Enough goes AFTER the adjective.

Now, you may have noticed after large enough we have the preposition FOR + students.

After enough, we can have for + person / people.

Let’s look at some more examples of this.

We didn’t mention if it is not hot enough for me, for you, or some other person.

To say who this refers too, we add for + person / people. For example:

Here I specify the person… for you… for you the old man.

After enough we can also have an infinitive, which is the base form of a verb. An infinitive has the form TO + VERB. The order is:

We can change the order of this and say:

Notice how we used the infinitive (to go) after enough.

Yes, she has the sufficient age to be able to vote.

Yes, it has a small size that is the sufficient amount to be able to put it in your pocket.

And if you want, you can combine for + person with an infinitive.

The correct word order is:

Yes, I have a sufficient amount of money to be able to buy the car.

They didn’t have any problems to complete it because it was easy for them.

Yes, it doesn’t have the sufficient strength for us to be able to use it.

We can use enough after a verb.

We hadn’t trained a sufficient amount so as a consequence, we lost the game.

Yes, you have done a sufficient amount.

Yes, he should study more.

Exactly, you don’t eat a sufficient amount of food.

Our last sentence was:

This consists of a verb (eat) + enough.

This means you don’t eat a sufficient amount or an adequate amount.

Sometimes there is an adverb between the verb and enough.

Remember: an adverb gives us more information about the verb, it says how or in what way.
In this last sentence it refers to in a healthy way.
Some more examples:

Did you notice how there was a verb before the adverb to give the order: verb + adverb + enough

Again, sometimes we use an infinitive after enough.

After enough we can use a noun: Enough + noun
This noun can be a plural countable noun or an uncountable noun.
Here enough means the correct number or amount. As many or as much as someone needs or wants.

In a way, this means… Is there a sufficient amount of room for me?

Yes, he has been saving for years and now he has enough money or the sufficient amount of money to buy one.

You can see the last sentences is negative and uses not + enough which means it is less than what is needed, it is an insufficient amount.

After enough + noun we can also have an infinitive.

Enough as a pronoun

Enough can be used as pronoun to replace enough + noun.

A: Have you got enough money?
B: No, I don’t have enough.

Here the pronoun enough is used instead of enough money to avoid repetition.

A: Would you like some more cake?
B: No thanks, I have had enough. (enough = enough cake)

We don’t repeat cake to avoid sounding repetitive. It is obvious we are talking about cake.

A: I bought some pizza.
B: Do we have enough for everyone? 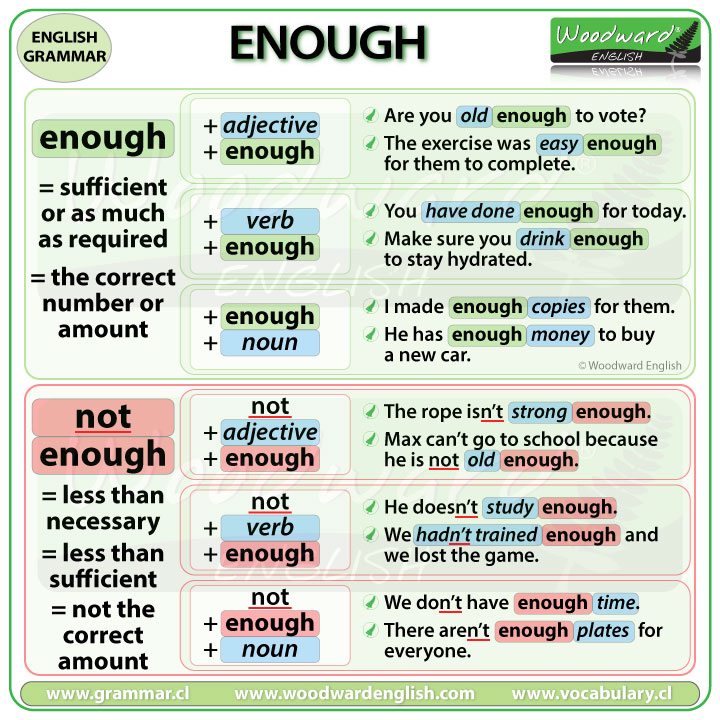