Between vs. Among – What is the difference?

Between and Among are prepositions.
Let’s look at the difference between these two words.

BETWEEN, as a preposition of place, is used to say something (or someone) is in the middle of a space separating two things.

Chile is on one side.
Argentina is on the other side.
The mountains are in the middle.

There is a large sunflower on both sides of the lady.

AMONG is used to say that something (or someone) is in the middle of something or a group of things. It is surrounded by something or is a part of a group.

BUT THERE IS MORE….

We can use BETWEEN to connect two periods of time.

NOTE: We cannot use Among with periods of time.

We can also use BETWEEN to show the interval between two points on a scale or a map.

BETWEEN can be used to show a connection or relationship between two (or three) things.

BETWEEN can sometimes be used for more than two things when those three or more things are individually identified.

AMONG is used to show a connection or relationship between three or more things that are not distinct, especially when considering a collective relationship. This is commonly used with group nouns or mass nouns.

Sometimes you will see Among written as Amongst. Amongst is more formal and less common.

Compare BETWEEN and AMONG

Here we are specifying the universities. Remember, it is possible to use the preposition BETWEEN with more than two things when they are identified individually. In this example we have specifically identified the universities with their names.

Here we are not specifying which universities. 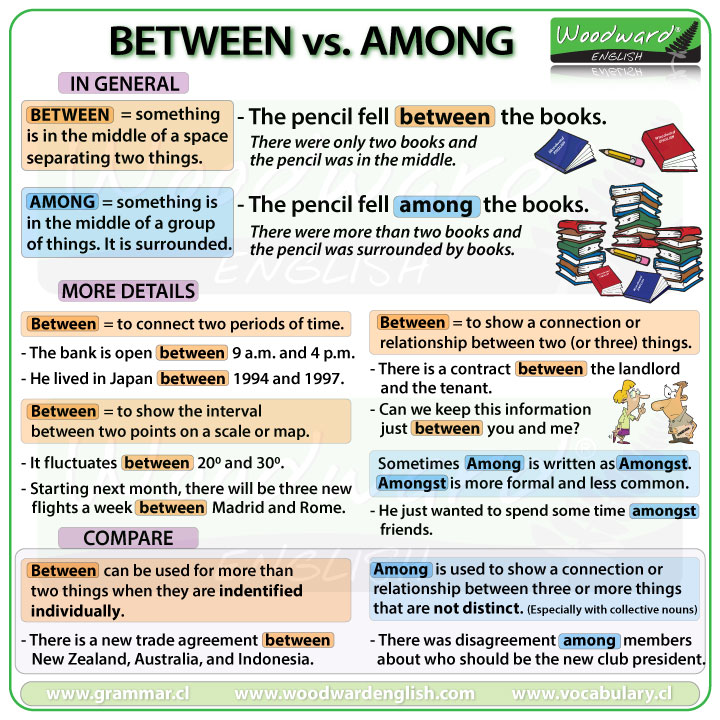 Shares
Lesson tags: Among, Between, Common Mistakes, Prepositions, Time
Back to: English Course > Prepositions in English