How to say telephone numbers in English

In English, we give telephones numbers by saying each individual number in it:

How to say 0 in a phone number

When there is a 0 (zero) in the telephone number, there are two ways of saying it:

The most common way is to pronounce the Zero like the name of the letter O (oh).

Sometimes in American English, the Zero is pronounced as Zero and not O.

However, you will also hear people say OH instead of Zero in American English.

If a phone number contains two of the same numbers together, we usually say double (then that number):

If a phone number contains three of the same numbers together, we usually say triple (then that number):

How can you ask for someone’s telephone number?

If you want to know someone’s phone number, you can ask:

We don’t normally say: What’s your telephone number? (Though it IS still correct)

The person will normally respond with:

Another way of asking for someone’s number is: 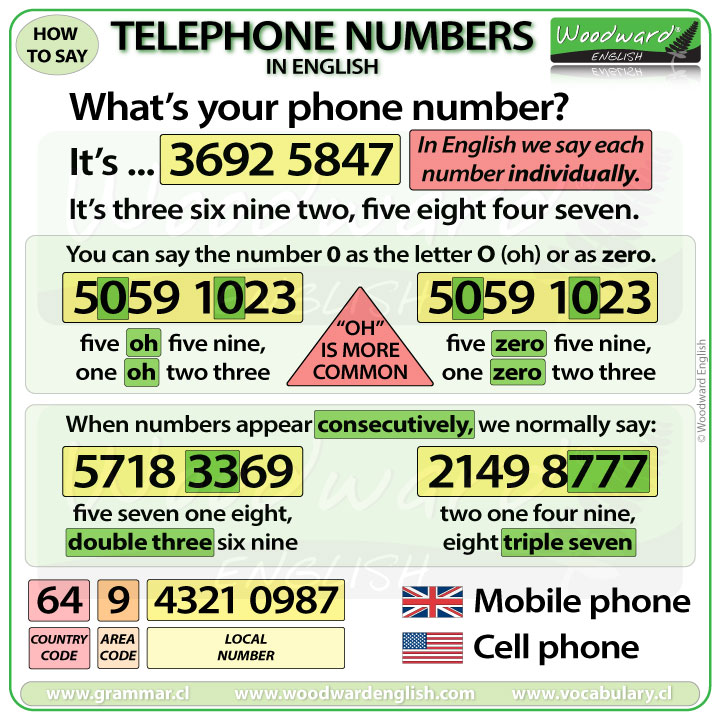 Area Code
The area code identifies the town, region or specific area. For example, the area code of Auckland (NZ) is 9.

Local number
The local number is normally 7 or 8 numbers long, depending on the country.

So with the number that appears, 64 is the country code (of New Zealand), 9 is the area code (of the city of Auckland) 9867-2134 is the local number. (In reality NZ local numbers currently only have 7 digits)

What is the emergency phone in your country?
What is your phone number?