Adverbs of definite frequency – How often?

HOW OFTEN means with what frequency.
I want to know the frequency you do something.

The pronunciation of OFTEN

OFTEN can be pronounced in two different ways.
By pronouncing the T … OF-TEN
or by not pronouncing the T …OF-FEN.
(Listen to the difference of pronunciation in the video above)
Both forms are correct and depend on where you live.

So we can SAY How OFTEN? or HOW “OFFEN”?
BUT, do not write the word as OFFEN!

This means I want to know the frequency that you brush your teeth.

How to answer a question with HOW OFTEN

When someone asks you a question with HOW OFTEN, you normally respond with an adverb of definite frequency.
This means it has a definite or exact frequency.

And how can we express this? We use the following structure.
Number + times + a + time period (this time period is a singular noun)

BUT there is an exception to this rule with the first two numbers.

Notice how the Time period is a singular noun…
Day, not days.
Week, not weeks.

EVERY + a time period

Another common way of expressing frequency is by using:

There is no plural S at the end of these words.

Instead of saying Every day, you can say Daily … be careful with the spelling of this word.

And of course you can say weekly and monthly too.

With the word YEAR, it is a lot more common to say ANNUALLY instead of Yearly.

Look at these examples. We can say…

Another possibility is using:
EVERY + number + a time period

In this case, the time period is a plural noun

In British English a period of two weeks is known as a fortnight.

Answer the following questions about your life using adverbs of frequency. 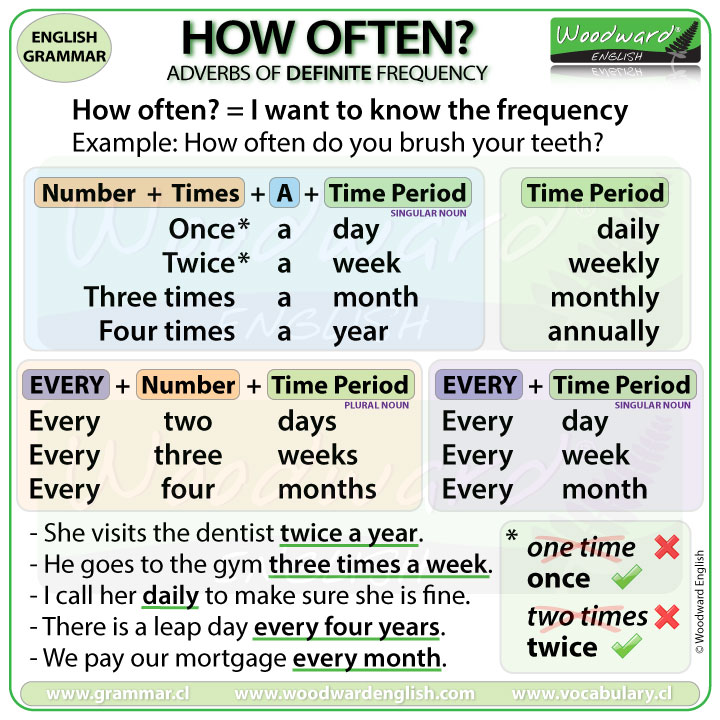