These are all adverbs and they describe how frequently we do an activity or the frequency of habits.

These are called Adverbs of Frequency or more specifically Adverbs of Indefinite Frequency. (Indefinite because it is NOT a specific frequency like three times a week, once a month, etc.)

To help you understand when to use each adverb of frequency, I will add some approximate numbers (percentages of frequency or possibility of it happening) to give you a general idea of the frequency associated with each adverb.

IMPORTANT: The percentages that appear on the left are only approximate numbers to give you a general idea of the frequency associated with each adverb.

Let’s look at each adverb of frequency more in detail…

When something happens 100% of the time, we use the adverb ALWAYS.

This means that without exception 100% of the time I will brush my teeth at night before going to bed.

What is the opposite of ALWAYS? … NEVER, which is 0% of the time.

This means there is a zero percent possible of this happening. The frequency is zero.

What adverb do we use when something happens half the time and the other half of the time it doesn’t happen?

When something has about a 50% frequency of happening. We use the adverb SOMETIMES.

What can we use if we almost never do something? It’s not zero percent but maybe 5% possibility of it happening.

In this case we use the adverbs HARDLY EVER or RARELY.

OR you can say…

They both mean the same thing.
This means there is a VERY small chance of it happening but it is almost never.

I hardly ever get angry. It usually only happens if you steal my chocolate from the fridge. Other than that, nothing else annoys me.

Let’s quickly look at the other adverbs of frequency.

USUALLY is when something happens around 90% of the time. It is almost always.

Yes, I live close to my place of work so I usually walk there.

NORMALLY or GENERALLY happen around 80% of the time.

Yes, about 80% of the time my marks are good, the rest of the time… they are excellent!

When something has a frequency of around 70%, we use the adverbs OFTEN or FREQUENTLY

OFTEN can be pronounced two ways:

Both forms are correct and depend on where you live.

Our examples of these adverbs are:

which is the same as:

The adverb OFTEN is more common than using the word FREQUENTLY.

The adverb Occasionally is at about 30% frequency.

Yes, this happens on Friday and Saturday night. I occasionally go to bed late.

And the adverb Seldom is at around 10% frequency.

Which means it is not common or not often that I add salt.

The adverbs Seldom, hardly ever, rarely, and never all have a negative meaning.

Let’s look at word order when we use adverbs of frequency.

In general, the adverb of frequency goes before the main verb.

Let’s look at this sentence…

The main verb is READ, so we put the adverb before the verb READ…

The main verb is PASSES so we put the adverb before it.

The main verb is SPEAK so the adverb of frequency goes before it.

When there is an auxiliary verb such as has, have, must, might, will, can, should, would, etc. followed by a main verb, then the adverb goes between them both.

HAVE is the auxiliary verb and DONE is the main verb so we put the adverb of frequency in the middle:

You can see it is the same rule as before, the adverb goes before the main verb. Just remember to put it after the auxiliary verb.
Look at this sentence:

HAS is the auxiliary verb and LIVED is the main verb so we put the adverb of frequency in the middle:

The adverb NEVER goes between the auxiliary verb HAVE and the main verb EATEN.

Adverbs of Frequency – Word Order with TO BE

Of course in English there is always an exception and this happens with the verb TO BE.

When we want to use an adverb with the verb TO BE, then the order is:

Subject + TO BE + Adverb

Look at this sentence:

AM is a form, or conjugation, of the verb TO BE so we put the adverb after it.

We cannot say “I normally am busy at work.” NO, this is NOT correct.

Again, the adverb is after the form of To Be.

The adverb SOMETIMES comes after the verb ARE which is a form of TO BE.

Adverbs of frequency at the beginning of a sentence

We have just seen the common position of adverbs of frequency within a sentence.

But, it is also possible to place SOME adverbs at the beginning of a sentence.

These adverbs include: usually, normally, frequently, generally, occasionally, and sometimes.

OR you can put the adverb between the subject and main verb:

Both sentences are correct.

But be careful with always, hardly ever, seldom, rarely, and never …. Do NOT put them at the beginning of the sentence.

We need to put ALWAYS before the main verb…

The exception to this is when we are using ALWAYS or NEVER in the IMPERATIVE to give orders or instructions.
We will see more about this in another lesson.

You might want to watch our other video about Adverbs of DEFINITE frequency. 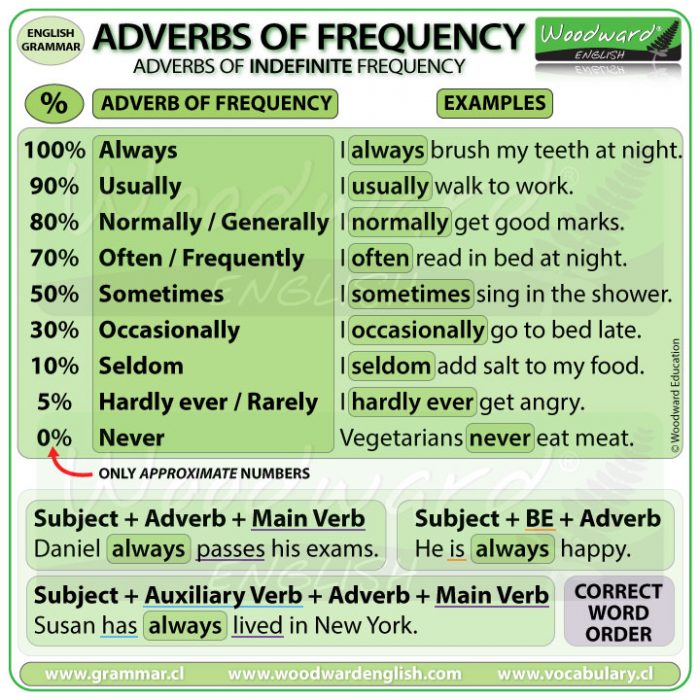 I hope you found this English lesson about adverbs of frequency useful. If you did, please let other people know about us!