Look at these two sentences:

We use VERY and TOO before an adjective.

It both sentences the adjective is hot so we say very hot and too hot.
What is the difference in meaning?

Very means a high degree or a very large amount.
Too normally has a negative meaning.

Let’s look at another example:

Here we are saying it is difficult for Mike but it is still possible for him to lift it.

Here we are saying it is NOT possible for Steve to lift it, it is impossible because it is too heavy for him. He needs to eat more spinach.

You can see that in this sentence TOO has a negative meaning again.

Yes, it was difficult but still possible. My legs were frozen but we still had a good time.

Again TOO has a negative meaning. Too cold means it was excessively cold so it wasn’t possible to play football.

Note: we do NOT say… it was very cold… or too cold.

These are NOT correct in English.

We will see more about too much and too many in another lesson. 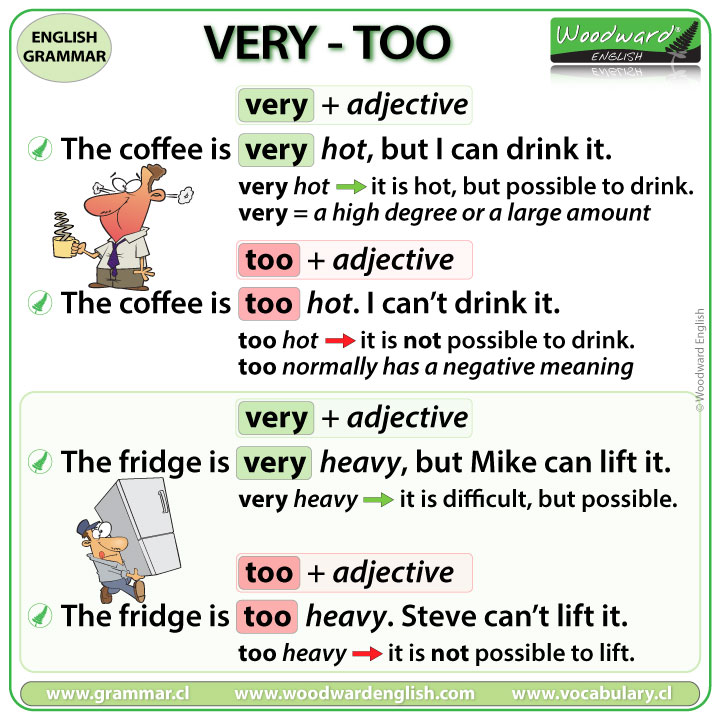 After VERY we can use an adverb. There is a verb before these so the structure is:

Note: it is better to use another adverb instead of very + adverb.

For example, instead of saying very badly, you could say terribly.

We can also create a sentence using TOO instead of VERY.

You can see again that TOO usually has a negative meaning or result.

He drove too quickly… and the negative result of this… he had an accident.

I arrived too early… and the negative result of this… I had nobody to talk to.

Shares
Lesson tags: Adverbs, Too, Very
Back to: English Course > Adverbs in English