Been To vs. Gone To

Been vs. Gone – Have been to vs. have gone to

New York … What do you say?
You have been to New York … or …  You have gone to New York?
Let’s look at the difference between BEEN TO and GONE TO.

Have gone to and Has gone to are used when someone is currently at a place AND they have not returned. The trip has NOT finished and they are still there.

If I say they have gone to New York, it means they are still there and haven’t returned.

Have been to and Has been to are used when someone has visited a place AND returned. The trip has finished.

If I say they have been to New York, it means they are visited and have returned.

BEEN TO vs. GONE TO comparison

Let’s compare BEEN and GONE together:

If you want to ask if someone has visited a place, you use BEEN TO in the question.
Been to = visited
The question is: Have you BEEN TO (x place) ?
For example:

We CANNOT use GONE TO.

Have you ever been to South Africa? Is like saying:

Now compare at these questions:

We want to know where Jack has gone because we can’t see him now.

We are curious about where Jack has BEEN because he has returned from somewhere and he’s covered in scratches.

Notice with these questions, since we used WHERE we did not use TO at the end.

Example sentences with BEEN TO

Example sentences with GONE TO

Been to vs. Gone to – Practice Exercises

Complete these sentences using BEEN TO or GONE TO.

The answers to this practice appear in our video. 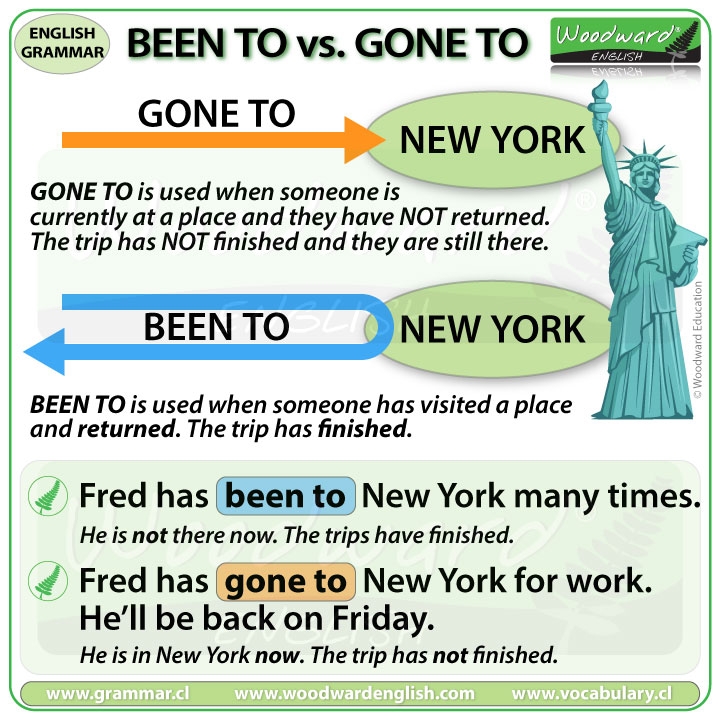 I hope you found this lesson about the difference between BEEN TO and GONE TO useful.
If you did, please let other people know about Woodward English.