The word DO appears a lot in English.

This is because it can be a verb, as in the verb TO DO which can be conjugated as Do and Does in the present tense, Did in the past tense and Done as a past participle.

Let’s look at each one in more detail. We will start with the verb TO DO.

As we have seen, the verb TO DO has four forms: Do / Does / Did and Done
Lets look at its form in the simple present tense.

TO DO – Present Tense

(Do my laundry means I wash my clothes, well, I put in the washing machine)

(Chores is the housework you need to do like washing the dishes, doing the vacuuming, etc.)

TO DO – Past Tense

The simple past tense of DO is DID for all subjects:
I did / you did / we did / they did / he did / she did / it did
Notice how there is only one form of the verb in the past tense…. DID.

TO DO – Past Participle

The past participle of DO is DONE. Remember that past participles are accompanied by a conjugation of the verb TO HAVE or TO BE (which means it is in the correct tense according to the subject)

These two sentences are in the present perfect tense because they have have or has before the past participle done.

Here we used a conjugation of the verb To Be before the past participle done.

TO DO – To replace a verb

We sometimes use the verb DO to replace a verb when the meaning is clear or obvious. This replacement is more common in informal spoken English:

(The first do means clean – The second do means mow)

Sometimes Do, Does, and Did are used as auxiliaries to make questions in English.

Let’s start with DO and DOES:

DO / DOES – For Questions

To make a question in the simple present tense in English we normally put the auxiliary Do or Does at the beginning of the question before the subject.
After the subject is the verb in its base form which means the infinitive without TO at the beginning.
Look at this affirmative sentence:

How can we make this a question? We add DO at the beginning so it becomes:

You will see that we add DO at the beginning when the subject is I, you, we or they.

But look at this affirmative sentence:

To make this a question we say:

You can see that we add DOES at the beginning when the subject is he, she or it.

Notice how the letter S at the end of the verb in the affirmative sentence (because it is in third person) disappears in the question. That is because the verb is in the base form of the infinitive.

NOTE: We DON’T use Do or Does in questions that have the verb To Be or Modal Verbs (can, must, might, should etc.)

Let’s look at the auxiliary DID.

To make a question in the Simple Past Tense in English we normally put the auxiliary DID at the beginning of the question before the subject.
And just like in the present tense, After the subject is the verb in its base form which means the infinitive with TO at the beginning.
Look at this affirmative sentence:

How can we make this a question? We add DID at the beginning so it becomes:

We use the verb form Live and NOT lived because the auxiliary DID show that the question is in the past tense.

Did is also used with He, She and It. So with this affirmative sentence:

To make it a question in the past tense we say:

Again we use DID for questions in the past EXCEPT with To Be and Modal Verbs such as Can.
Compare these questions:

The only difference between a question in the present tense and the past tense is the first part… DO or DID.
And look at these two questions

The only difference between a question in the present tense and the past tense when it refers to third person (he, she, or it) is the first part… DOES or DID.

Auxiliary and Verb together

Look at this question:

Why are there two DOs in this question?
The first DO is necessary because we are making a question in the simple present tense.
The second DO is from the verb TO DO. You DO exercises.

What happens if instead of YOU we are asking about another person?

We use DOES because it is necessary for simple present tense questions for third person, in this case for SHE. Does she….?
Again DO appears because you DO exercises. It appears as DO and not DOES because the verb needs to be in the base form of the infinitive.

Of course in the past tense you would say:

Did is an auxiliary which is needed to make a question.
Do is from the verb To Do.

DO and DOES – For Emphasis

Sometimes Do / Does / Did are used in positive sentences to give special emphasis that what you say is true, despite what the other person thinks. Note that when speaking, the word (do/does/did) is stressed.

Notice that Did is used for positive sentences in the past tense and that the main verb is in its base form. 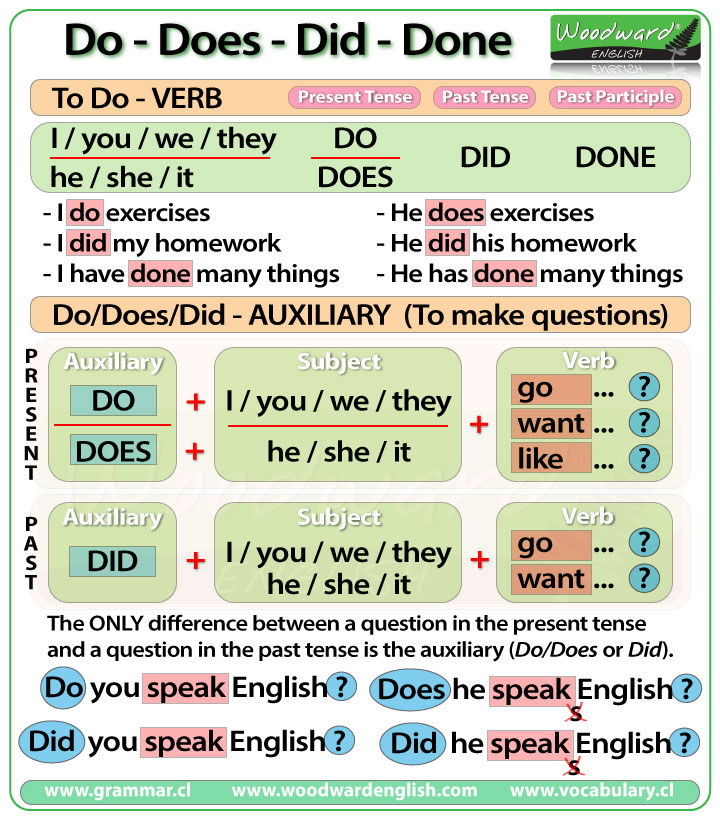 Shares
Lesson tags: Did, Do, Does, Done, Past Participles, Past Tense, Perfect Tense, Present Tense, Time
Back to: English Course > Perfect Tense