101 Irregular Past Participles in English

The following is a list of 101 irregular past participles in English with example sentences:

be – been: I have been busy all day.
become – become: They have just become angry with each other.
begin – begun: We have begun a new project.
bend – bent: He has bent over so many times today that his back now hurts.
bet – bet: He has just bet all of his money at once.
bite – bitten: The dog has just bitten the postman.
bleed – bled: HIs finger has bled all over the table.
blow – blown: He has blown out all of the candles.
break – broken: She has just broken her pencil.
bring – brought: The waiter has finally brought our order to the table.

build – built: The boy has built a sandcastle.
buy – bought: She has already bought many things today, but she hasn’t finished yet.
catch – caught: We have caught many fish today.
choose – chosen: He still hasn’t chosen a main course from the menu.
come – come: I don’t know why she has come to my party in a costume.
cost – cost: It has cost me a lot of money to start my new business.
cut – cut: She has just cut the paper with a pair of scissors.
deal – dealt: She has just dealt new cards to the other players.
dig – dug: The dog has dug another hole in the backyard.
do – done: She has already done her homework so now she can relax.

draw – drawn: He has drawn another cartoon for the lesson.
drink – drunk: He has drunk three glasses of water this morning.
drive – driven: The clown has driven his small car in circles all afternoon.
eat – eaten: She has eaten all of the cake.
fall – fallen: The bowling ball has fallen on his foot again.
feed – fed: She has fed the pigeons every day this month.
feel – felt: She has felt cold all day.
fight – fought: He has fought many battles in his lifetime.
find – found: She has just found a coin on the ground.
fly – flown: The pilot has flown to our city many times.

forget – forgotten: I have forgotten what I have to do right now.
forgive – forgiven: She has forgiven him.
freeze – frozen: The cold weather has frozen the lake.
get – got/gotten: He has just got the new high score. (Got: British English – Gotten: American English)
give – given: My children have just given me a birthday present.
go – gone: The kids have gone to the local park to play.
grow – grown: Flowers have grown under the hammock.
hang – hung: Someone has hung him on the clothesline.
have – had: I have had pancakes for breakfast all week.
hear – heard: She has just heard a sound coming from the box.

hide – hidden: He has hidden his face.
hit – hit: A ball has just hit her in the head.
hold – held: She has held the egg in her hand for ten minutes now.
hurt – hurt: You have hurt my feelings.
keep – kept: He has always kept his tools in a toolbox.
know – known: I have known Jason for over ten years.
lead – led: He has led his pet along the street many times.
leave – left: They have already left the office.
lend – lent: He has lent me some money until next week.
let – let: My boss has let me leave work early today.

light – lit: He has just lit a match.
lose – lost: He has lost two matches in a row.
make – made: She has just made a chocolate cake for us.
mean – meant: Your help has meant a lot to me.
meet – met: This year I have met many interesting people.
pay – paid: She has just paid her taxes.
put – put: I have already put my suggestion in the box.
quit – quit: He has just quit his job.
read – read: I have read many books this year.
ride – ridden: She has ridden her horse many times in competitions.

ring – rung: He has rung the doorbell three times, but nobody has answered yet.
rise – risen: Profits have risen considerably this year.
run – run: He has run in many marathons.
say – said: He has said before that he liked flowers.
see – seen: The pirate has just seen another ship in the distance.
sell – sold: He has sold a lot of lemonade today.
send – sent: He has sent a postcard to us, but it hasn’t arrived yet.
set – set: He has just set the table so now we can have dinner.
shake – shaken: We have just shaken hands to close the deal.
shine – shone: He has always shone a flashlight to light his way in the dark.

shoot – shot: He has just shot at the target.
shut – shut: The boy has shut his eyes so that he won’t see the surprise.
sing – sung: We have sung this song many times at karaoke.
sink – sunk: Many ships have sunk off the coast due to the hidden reef.
sit – sat: They have sat on the park bench most of the afternoon.
sleep – slept: This is not the first time he has slept in that armchair.
slide – slid: She has slid to second base.
speak – spoken: He has spoken to a large audience many times.
speed – sped: He has just sped past a police officer.
spend – spent: He has just spent all of his savings on a new gaming console.

spin – spun: The dancer has spun around very quickly without becoming dizzy.
spread – spread: You can see that I have spread a lot of jam on the bread.
stand – stood: A guard has stood outside the entrance all day.
steal – stolen: A thief has stolen an expensive painting from the museum.
stick – stuck: Some chewing gum has stuck to the bottom of his shoe.
sting – stung: A bee has just stung my arm and it hurts.
strike – struck: He has just struck the ball very well.
sweep – swept: The man has swept the footpath with his old broom.
swim – swum: The boy has swum to the edge of the pool because he is tired.
swing – swung: He has just swung on a vine for the first time.

take – taken: She has just taken her medication because she wasn’t feeling well.
teach – taught: He has taught geography for over twenty years.
tear – torn: She has just torn the contract in half.
tell – told: I have told you many times to be more careful.
think – thought: He has thought about the problem but still doesn’t have a solution.
throw – thrown: She has thrown the can into the bin.
understand – understood: He has understood the entire lesson.
wake – woken: My alarm clock has just woken me up.
wear – worn: She has worn that blue hat and blue dress to class before.
win – won: He has already won three medals in the competition today.

write – written: The teacher has written a message on the board for his students. 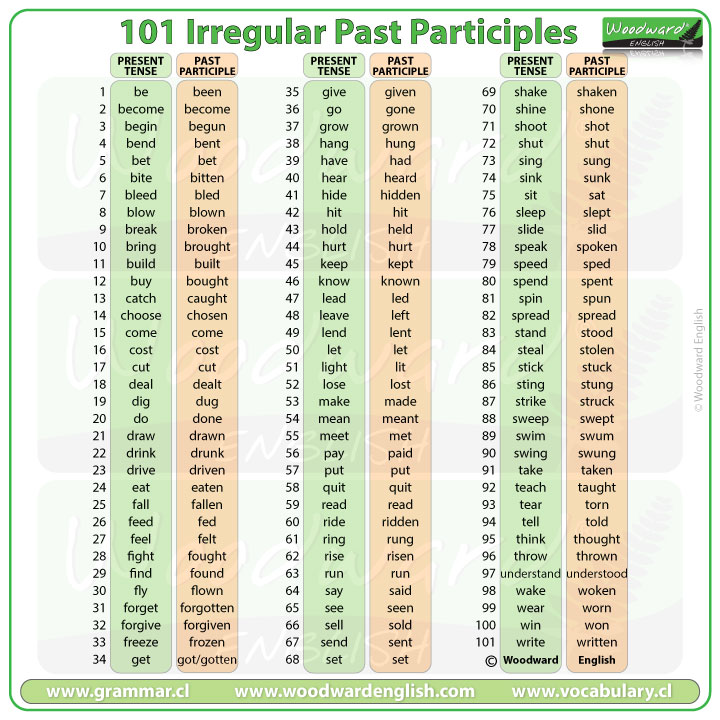