What did you want to be when you grew up? – English Conversation Question 5

THIS ENGLISH LESSON WAS A LIVE CONVERSATION ON YOUTUBE

When you were a kid, what did you want to be when you grew up?

Kid is an informal word for Child.
A child is a young person who is not an adult.

See our lesson about the Difference between child, child’s, children and children’s in English

Some of you may be a kid or child right now, but I imagine almost all of you are adults.
That is why I used the past tense of TO BE … WERE … When you WERE a kid (in the past).

Grow up – Meaning and Examples

Grow up is a phrasal verb.

To grow up means: to gradually develop into an adult. To grow towards full physical or mental maturity.

When you tell someone to grow up, it also means you want the person to stop behaving in a childish way.

Did you want to be a pilot when they grew up?
What does a pilot do?
A pilot flies planes.

Did you want to be a teacher when they grew up? Why? Why not?
What does a teacher do? …

Did you want to be a rock star or a famous singer?
Why? Can you sing? Can you play a musical instrument?

Did you ever dream of becoming a superhero?

Did you ever dream of becoming an inventor?
What is stopping you from inventing something now?

Did you ever play certain professions as a child?
For example: Pretend to be police officer or a private investigator.
Who did you play these games with… friends, cousins?

What are some typical professions that children want to be when they grow up in YOUR country?

Has the type of professions kids want to do changed over the last decades?
For example: 50 years ago computers were not common so it wasn’t normal to want to work in that area when you are a child.

Is YouTuber a career? What about being an influencer?
Why do so many kids want say they want to create video games when they grow up?

Do kids usually have the same profession as their parents nowadays?

Are you currently doing what you dreamed you would be doing as a child?

What do you do now?
Remember: To be + a/an + profession… I am A teacher. I am AN accountant.

Did you think there is still time to be the person you wanted to be as a child?
Why do people change the profession they wanted to do when they were a child?

When you were a kid, what did you want to be when you grew up? 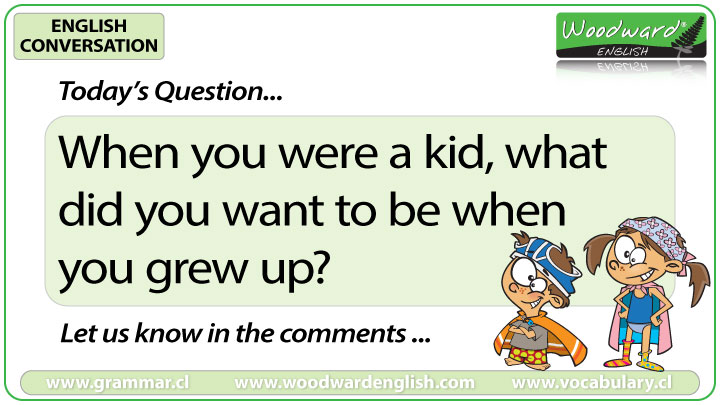