What is the difference between all, every and each?

A simple explanation is:

We use ALL to talk about the total number of things, with everything considered as one group and not individually.

ALL is used for the entire amount of something. This amount is a minimum of three things. When there are two, instead of saying ALL you say BOTH (We will learn more about BOTH in another lesson)

We use EVERY to talk about things collectively as a group more than individually. There are a number of individual people or things together though they are collected together and considered as a group.

EVERY is usually for a large number. Never for two things or two people.

We use EACH to talk about the individual members of a group as separate items. These individuals may all be of a similar type of characteristic though they are considered one by one, not as a group.

EACH is usually for a small number. (It is easy to count each individual person or thing) It can be used for two or more things or people.

ALL is used with a plural noun For example:

Yes, if it is a house, it needs a roof.
We look at the total group as one. All houses, no exceptions.
We are talking about all houses in general. If you want to specify a group of houses, you could also say:

But in this case, we only use ALL OF THE houses if we have already talked about these specific houses previously. They are a specific group of houses we mentioned before. We will see more about this in another lesson.

ALL can also be used to make a generalization. For example:

Yes, all of the elephants in the world are, in general, slow.

EVERY / EACH + singular noun

After EVERY and EACH we use a singular noun.

Let’s look at an example of EVERY + Singular noun

Here we consider the houses collectively as one group. Each house in that group looks the same. They have the same design, same number of windows, they are painted the same color. Every house on the street looks the same.

Let’s look at an example of EACH + Singular noun

Each is used when we consider them individually, one by one.

EVERY can be used for how often something happens. For example:

We have every + number + plural noun

This tells us the frequency something happens.

There are more uses of EVERY though we will see them in a separate lesson.

EACH can be used with OF + an object pronoun such as you/us/them etc. For example:

Yes, she gave a gift to each of us individually… not one gift for the group.

There are more uses of EACH though we will see them in a separate lesson.

What is the difference between EACH and EVERY?

Each considers all members individually while every refers to all members of a group collectively.
Every is also closer in meaning to All.

Look at this example.

Here we think of all of the books individually, one by one forming the total.

But look at this sentence:

Here we think of all of the books collectively as a group.

There is less emphasis on them individually compared to each.

We cannot use Each with the words Almost or Nearly. Here we use Every. For example:

The correct way to write this is:

What is the difference between ALL and EACH?

(= Goodbye students … I just say the word goodbye once)

(= Goodbye Ange, goodbye Diego, goodbye Daniel… etc. until it has been said to ALL of the students individually… Yes, there is a lot of repetition if you say goodbye to each student.)

What is the difference between ALL and EVERY?

A simple way to remember is that All is with a plural noun + plural verb while Every is with a singular noun + singular verb. Every can also suggest “without exception”.

We use All with uncountable nouns (and not Every) because they cannot be counted individually.

We will look at more meanings and uses of ALL, EVERY and EACH in separate lessons.

I hope you found this English grammar lesson useful. If you did, please let other people know about this free lesson.

All, Every, Each – Summary chart 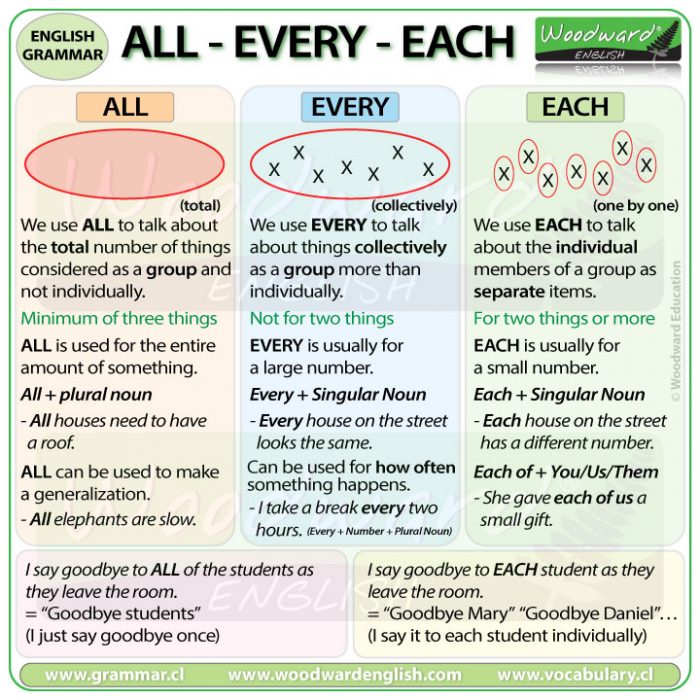