Much and Many are used to express that there is a large quantity or a large amount of something.

See our video about countable and uncountable nouns if you are not sure what they are.
Let’s look at much and many in more detail.

Much is used with uncountable nouns.

Time, Money and Electricity are uncountable nouns so we use MUCH before them.

Many is used with plural countable nouns

Chairs, friends and people are countable nouns so we use MANY before them.

So, what do we use for positive or affirmative sentences?

OR you can say…

There is no difference in meaning though in general:

The same is possible with countable nouns. You can say:

The last one is more informal.
A couple more examples…

And with both of those we can use LOTS OF.

Now look at the following sentence. We cannot say…

This is NOT correct because we cannot use MUCH when the sentence is affirmative.
We say:

Now look at this sentence:

In theory it is possible to use MANY in positive sentences though it is not common in spoken English. It is formal.

In general English you say:

OR you can also say…

With UNCOUNTABLE nouns in Affirmative statements, You can say:

OR you can say:

(the last one is more informal)

BUT you cannot say:

Avoid using much in affirmative sentences.

In negative sentences, we also use MUCH with uncountable nouns.

OR you can say

The first one with MUCH is more common.

And the same happens with questions, we use MUCH with uncountable nouns.

Again, much is more common in questions that A LOT OF.

What to use with plural countable nouns

Let’s look at plural countable nouns.
With Affirmative statements you can say…

They both mean the same thing though the second one, LOTS OF friends, is more informal than the first.

Now, you may hear “I have many friends” though it is not common and is considered formal.

We almost always use A lot of or lots of with affirmative statements.

In negative sentences, we use Many with plural countable nouns.

You can also say:

The same with questions.

Which is the same as…

As a general rule we use A LOT OF with positive statements and MUCH and MANY with negative sentences and questions.

What would the negative of this sentence be?

Using Much and Many WITHOUT a noun

We can drop the noun after much and many if the meaning is clear.

Look at the following examples:

(We are obviously referring to eating much food)

Many at the end of this sentence means many mushrooms.

But we don’t say or write the word mushrooms again to avoid unnecessary repetition.

You can also drop the noun if it is mentioned by another person.

Here much means much snow though we don’t need to say snow again as it is obvious what we are talking about. 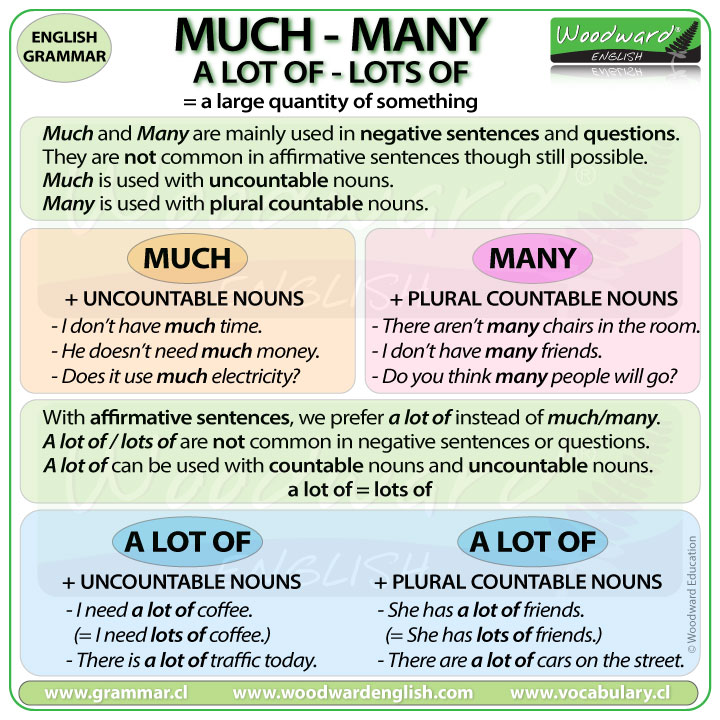 Much vs Many Practice

Let’s practice… Do we use MUCH or MANY in these sentences?

The answers are in the video at top of this lesson.

I hope you found this English lesson useful. If you did, please let other people know about Woodward English.
Have an awesome day!