The plural of FISH – Fish or Fishes?

What is the plural of Fish?

Do you say fish or fishes?

The plural of fish is almost always …. fish. (No -es at the end)

There is even a famous book by Dr. Seuss called One fish, two fish, red fish, blue fish. Note how it is two fish and not two fishes.

When can I use fishes?

Fish is used when we are counting individual fish …. one fish, two fish, three fish… etc.
A number of fish of the same species are called ‘fish.’

However in marine biology / zoology etc., ‘fishes‘ refers to more than one species of fish.
We are talking about entire species and NOT individual fish numbers.

This book talks about the different species of freshwater fish in New Zealand. We use fishes because there is more than one species. We are not counting the number of fish, just the amount of species.

Imagine you have an small aquarium. In that aquarium there are 6 fish. This means there are total of 6 individual fish. They may be of different types but we are interested in the number of fish and not how many species there are.

If I say there are 6 fishes in my aquarium, it refers to 6 different species of fish. There might by a goldfish, a clownfish and four others including a piranha (ok, maybe not a piranha as it would each the other fish).

However in general everyday English, we would most likely say:

Also, if you have a bucket of fish. There may be more than one type or species of fish in it though you will normally say:

The verb To fish

To fish means to try and catch fish.
If we conjugate the verb in the simple present tense, it becomes…

Fishes is the third person conjugation of the verb To fish in the simple present tense.

Did you know there are other words that don’t change in plural form?

Unless you are a marine biologist, you will always use fish as the plural of fish. 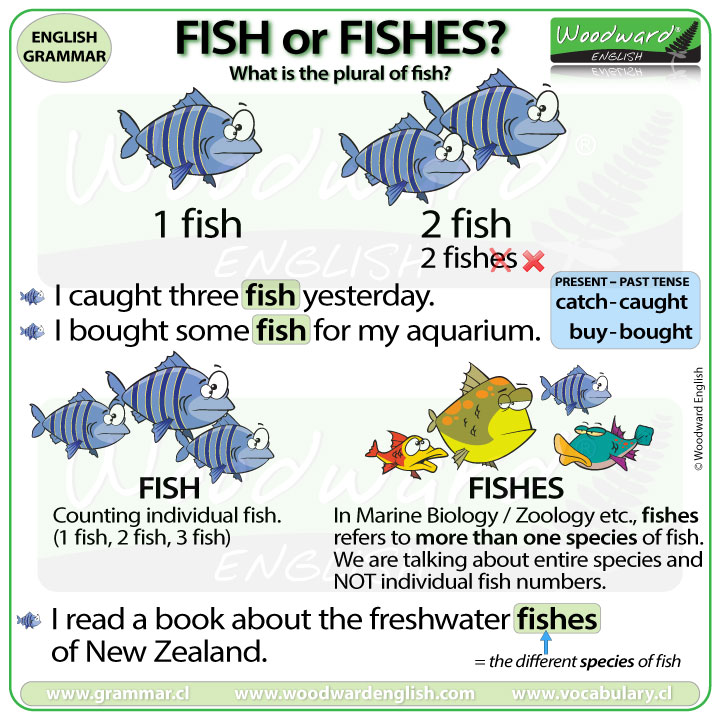