What is the difference between another, other and others?

What does ANOTHER mean?

Another is an adjective (or determiner) or a pronoun

ANOTHER generally means: one more; an extra; an additional
ANOTHER can also mean: an alternative or a different.

Perhaps she liked it or she is very thirsty so she wants another cup of tea.
Another example: (which means an extra example or one more example)

But ANOTHER can also mean: an alternative; a different. For example:

Maybe because the day we planned is not available.

In general ANOTHER is followed by a singular countable noun.
As you can see in our previous examples:

Another as a pronoun

Another can also be use as a pronoun.

Another can be used before a plural noun when there is a number before that noun or before “number words” such as couple of and few etc.
The word order is another + number + plural noun

(Here we are saying an additional three days)

(It doesn’t need to be a specific number a certain words referring to numbers. A couple means two.)

What does OTHER mean?

OTHER is an adjective (or determiner) or a pronoun.
OTHER generally means: more in addition to the one (or ones) already mentioned;
It can also mean alternative or different.
In this case, OTHER is the plural form of ANOTHER

Another refers to one additional book for you or an alternative book for you.
We used another because book is singular.
We use: Another + singular noun

Other refers to additional books apart from the one you already have.
We used other because there is more than one book.
We use: Other + plural noun.

OTHER can also mean: alternative; different from what was mentioned.

(other styles means alternative styles, different from the styles you have already seen)

(The person would like to see different or alternative dresses)
As you can see, the order is generally OTHER + plural countable noun

Others is a pronoun or a noun

Others replaces “other + plural noun”

Others is not followed by a noun.
others = other people. Let’s look at the first use of others.

You can see other + plural noun.
But repeating the word shoes again sounds repetitive and NOT natural so we use the pronoun others.

Others replaces other shoes.

The others can refer to the other people as we have already seen.
But here it can be used to refer to our friends. = What are our other friends doing tonight?

Quick Summary: What is the difference between another, other and others?

A simple rule to help you remember the difference is: 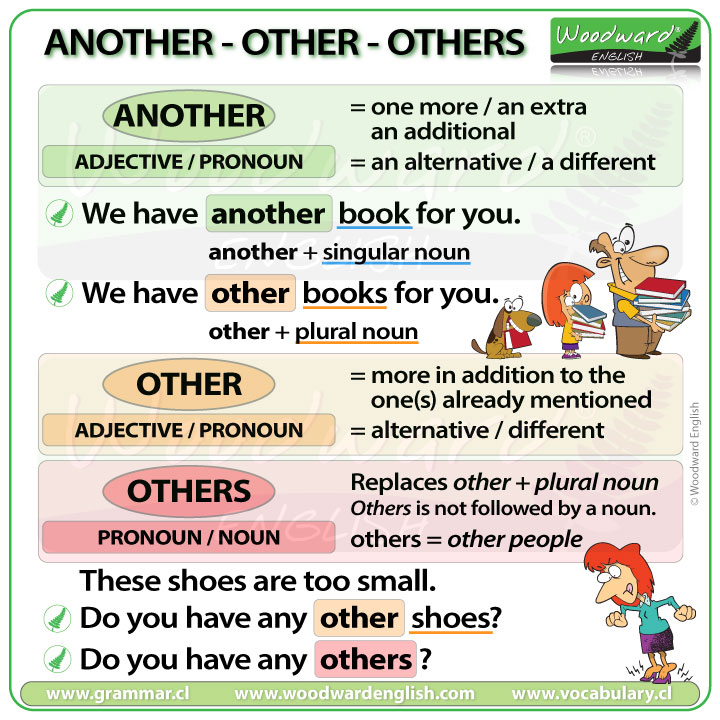