Mustn’t vs. Don’t Have To

If you haven’t already seen them yet, I recommend reviewing our lessons about the modal verb MUST and also the lesson about difference between MUST and HAVE TO.

In this lesson we are going to look at the difference between MUSTN’T and DON’T HAVE TO.

What is the difference between MUSTN’T and DON’T HAVE TO?

Be careful with the negative of Must and Have to.

There is a BIG difference in meaning between Mustn’t and Don’t have to.

Mustn’t means something is prohibited or it is not allowed.
It is important that you do NOT do something

Don’t have to means there is NO obligation to do something.
You are not required to do something, especially if you don’t want to. You can do the thing if you want to.

Let’s compare the two together where it will make a lot more sense.

You can see that Mustn’t is a negative obligation while Don’t have to is an absence of obligation. Don’t have to means it is not necessary, it is not compulsory, but you have a choice. You have the choice to drink that or not.

However Mustn’t is an obligation NOT to do something, in this case NOT to drink that.

You mustn’t tell John, and You don’t have to tell John. Can you see the difference?

Notice how we used doesn’t have to instead of don’t have to.

Let’s practice. Complete the sentences with MUSTN’T or DON’T HAVE TO.

The answers appear in the video.

MUSTN’T vs. DON’T HAVE TO Summary Chart 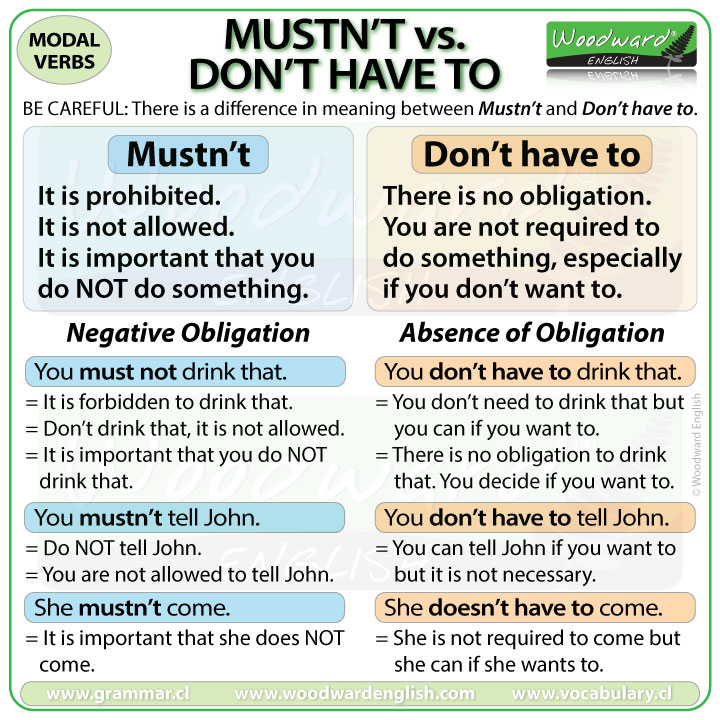