Will vs. Going To

WILL vs. GOING TO – English Grammar Lesson

In general, WILL and GOING TO are used to talk about the future.

BUT, What is the difference between WILL and GOING TO?

Both Will and Going to can be used for making predictions about the future without having a real difference in meaning. We think or expect something to happen in the future.

Both of these sentences are making a prediction about the weather tomorrow. We are not 100% certain how the weather will be, we are just predicting it.

I’m making another prediction about your exam result!

So, both WILL and GOING TO can be used for predictions.

BUT, there are other situations or uses where you use one more than the other. Let’s look at these other uses of WILL and GOING TO now.

Uses of WILL in English

We generally use WILL in the following situations:

This is an instant decision about the immediate future. We more or less decide at the same time the words are spoken.

You can use WILL when you are offering to do something for someone in the future.

You can use WILL when you promise to do something for someone in the future.

When two people link their little fingers together and they make a promise to each other, this is called a pinky promise.

You can use WILL when you are making a threat that something will happen.

You can use WILL for a habit that is a predictable behaviour.

Note: WON’T is a contraction (or a short way of saying) WILL NOT.

Uses of GOING TO in English

BE GOING TO is normally used to indicate the future but with some type of connection to the present. We use it in the following situations:

You can use GOING TO when you have already decided or planned to do something in the future. The decision was made before the moment of speaking.

You can use GOING TO when there is evidence (or there are signs) that something is going to happen. Something is likely to happen based on the evidence or experience that you have.

You can use GOING TO when something is about to happen (any moment now).

Compare Will vs. Going To

Let’s compare WILL and GOING TO together.
If someone asks:

I use GOING TO because it is a plan I made earlier (before I was asked the question). I already know which movie I’m going to watch. – In this case we cannot use WILL.

BUT, if I haven’t made any plans for this evening, then I could say:

We can use either WILL or GOING TO in our response because we are predicting what will probably happen (since we haven’t made any plans).

Will vs. Going To – Summary Chart 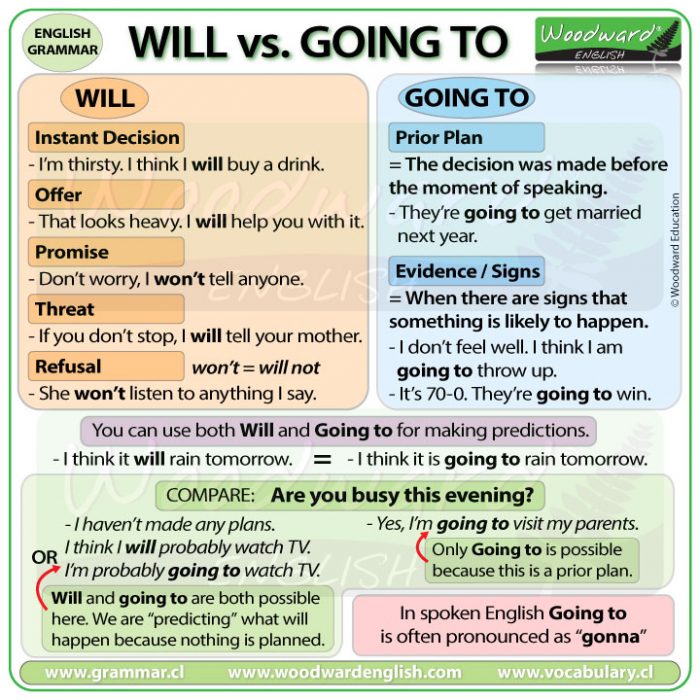 A quick note:
Just so you know, both WILL and GOING TO generally refer to something happening in the future.
Don’t worry so much about using the correct one perfectly each time as even if you misuse them, a native speaker should understand your intention without any problems.

I hope you found this grammar lesson about WILL useful. If you did, please let other people know about it.