NEITHER – EITHER – English Grammar Lesson

So am I = I am happy too.
“I am happy.” is a positive sentence.
What happens when we have a negative sentence? For example:

We cannot respond with SO AM I because SO is only used to agree with positive sentences.

For negative sentences we use NEITHER so we would say:

Now, if the positive response of So am I means I am happy too.
What does Neither am I mean?

In this case, Neither am I = I am not happy either.

There are two ways to pronounce the word NEITHER.

Both forms are correct.
(See our video to hear the pronunciation of NEITHER)

The auxiliary verb needs to agree with the verb tense in the original statement or sentence.

In the first sentence “I am not happy.”
The verb is am which is a form of To Be in the present simple tense.

So, the complete interaction is:
Speaker A: I am not happy.
Speaker B: Neither am I.

Neither am I = I’m not happy either.

Let’s look at a similar example:

What tense is used here?
The past simple tense.

Since we have to use the same tense… what would the man’s response be to agree with the woman’s statement?

Both sentences are in the past simple tense.

Now, all of these sentences have used TO BE… in the present simple and past simple tense.
What happens with other tenses?
Look at this sentence:

Do we respond with: Neither want I ? NO!
We do NOT respond with the same verb we need to use an auxiliary verb.
We say:

The auxiliary verb for the present simple tense is Do or Does.
In this case we used DO because the subject is I …. Neither do I.
So the complete interaction is:

We use an auxiliary for all verbs except for TO BE and Modal verbs.
Let’s look at the same sentence in the past tense.

How can we respond?

DID is the past simple tense auxiliary verb.

Neither did I = I didn’t want any more either.

So the complete interaction is:

NEITHER and EITHER are used to show agreement with negative statements said by person A.

Person B uses the word order: NEITHER + AUXILIARY + SUBJECT.
The auxiliary verb used (by person B) needs to agree with the verb tense in the original statement (by Person A).

NEITHER with the Present Tense

Person B needs to use the same tense so would respond with:

Neither am I = I’m not hungry either.

The response could be …

Neither are you = You are not trying either!

Neither do I. = I don’t need help either.

You could say Neither do I … but let’s talk about another person, let’s use the name Sam. The response would be:

DOES because the auxiliary DOES is used for he/she/it.
Neither does Sam = Sam doesn’t like fish either.

NEITHER with the Past Tense

This is the past simple tense of To Be (in negative form) so we need to respond with the same tense.

Neither was I. = I wasn’t bored either.

Again, we need to use the past tense in the response. It becomes…

Neither were we. = We weren’t invited either.

Neither did I. = I didn’t like the book either.

Let’s see some more examples with some modal verbs and perfect tenses.

NEITHER with Modal Verbs

This means: I can’t swim either.

This means: I could see the stars too.

Here it uses the negative form of WILL which is WON’T. These are used to talk about the future, so our response needs to use WILL too.

This means: I won’t be there either.

If the first statement has WOULDN’T, our response needs WOULD.

This means: I wouldn’t eat that either.

The negative form of the modal verb SHOULD is used. This means we also need to use SHOULD in the response.

This means: I shouldn’t worry either.

NEITHER with Perfect Tenses

Here we have the present perfect tense with the negative form of HAVE before the past participle. For our response, we need to use the auxiliary verb HAVE.

This means: I haven’t studied either.

This is another perfect tense, this time the past perfect tense. So we need to use the same auxiliary (HAD) in our response.

This means: I hadn’t finished either.

Sometimes NOR is used instead of NEITHER
It has the same word order of:
Nor + Auxiliary + Subject

For example, if someone says:

You can respond with:

Nor was I = Neither was I.
Both forms are correct and mean the same thing.

How could we respond this using NOR instead of NEITHER?
You can say:

Nor did I = Neither did I.
Again, both forms are correct. 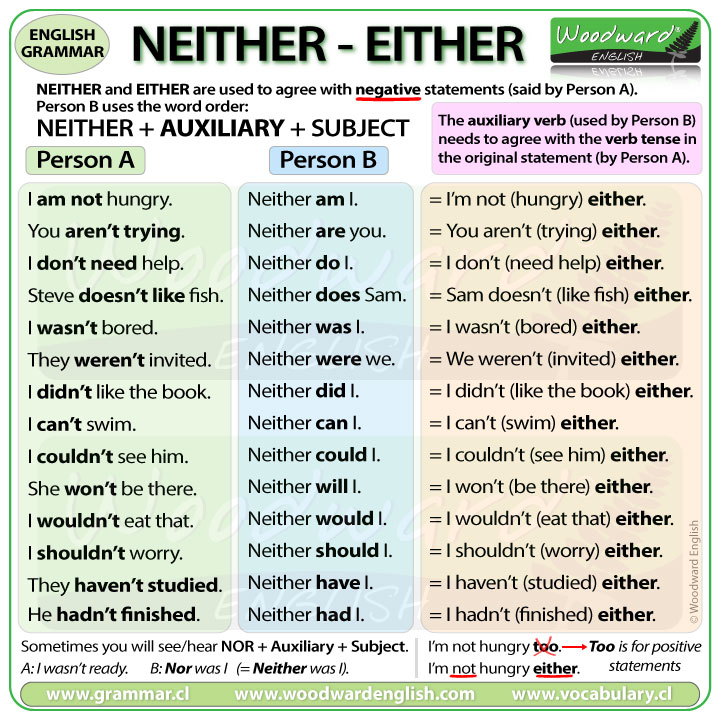 So – Neither Practice Exercises