SO – TOO – English Grammar Lesson

Too is used to show agreement with a positive statement.
Too appears at the END of a sentence.
Too means also.
I am happy too. = I am also happy.

But if someone says: I am happy.
and you say: I am happy too.
It is possible, it is correct BUT it also sounds repetitive.

The auxiliary verb needs to agree with the verb tense in the original statement or sentence.

Let’s look at a similar example:

What tense is used here?
The past simple tense.

Since we have to use the same tense… what would the girl’s response be?

Both sentences are in the past simple tense.

What happens if you are talking about other people?
The same concept applies.

Here, the man in the middle is not saying: I am happy.
No, he is pointing at the boy.
So, he is going to say:

The other boy in the middle could say “So am I” if he is talking about himself.
BUT in the picture in the video, the boy is pointing at the girl on the right.
In this case, the boy would say:

Both are in the past simple tense.

Now, all of these sentences have used TO BE… in the present simple and past simple tense.
What happens with other tenses?
Look at this sentence:

Do we respond with: So need I ? NO!
We do NOT respond with the same verb we need to use an auxiliary verb.
We say:

The auxiliary verb for the present simple tense is Do or Does.
In this case we used DO because the subject is I …. So do I.
So the complete interaction is:

We use an auxiliary for all verbs except for TO BE and Modal verbs.
Let’s look at the same sentence in the past tense.

DID is the past simple tense auxiliary verb.
So the complete interaction is:

SO and TOO are used to show agreement with positive statements said by person A.

Person B uses the word order: SO + AUXILIARY + SUBJECT.
The auxiliary verb used (by person B) needs to agree with the verb tense in the original statement (by Person A).

SO with the Present Tense

Person B needs to use the same tense so would respond with:

The response could be:

As we have already seen:

Let’s try this a little differently:

You could say: So do I … but let’s talk about another person liking pizza too, let’s use the name Mary. The response would be:

DOES because the auxiliary DOES is used for he/she/it.

When I say: So does Mary, it means Mary likes pizza too.

SO with the Past Tense

This is the past simple tense of To Be so we need to respond with the same tense.

Again we need to use the same past tense in the response. This time let’s use THEY in our response. It becomes…

So were they. = They were late too.

This is the past simple tense and it is NOT to be. The main verb is watched.

This means we need to use the past tense auxiliary DID, so the response could be:

This means: I watched a movie last night too.

Let’s see some more examples with some modal verbs and perfect tenses.

SO with Modal Verbs

This means: I can play the guitar too.

If the first past has the modal verb could, then the response needs the same.

This means: I could see the stars too.

Here it uses WILL to talk about the future, so our response needs to use WILL too.

This means: I will win an award too.

If the first statement has WOULD, our response needs WOULD.

This means: I would like a cup of coffee too.

The modal verb SHOULD is used. We need to use the same in the response.

This means I should study more too.

SO with Perfect Tenses

Here we have the present perfect tense. In this case we use the auxiliary verb HAVE in our response.

This means: I have finished early too.

This is another perfect tense, this time the past perfect tense so we need to use the same auxiliary (HAD) in our response.

This means: I had eaten too much too.

More than a response

SO isn’t only used in a response.
Sometimes we can use: SO + AUXILIARY + SUBJECT as a continuation of the first part of the sentence.
For example:

We use the first sentence so that you don’t sound repetitive. 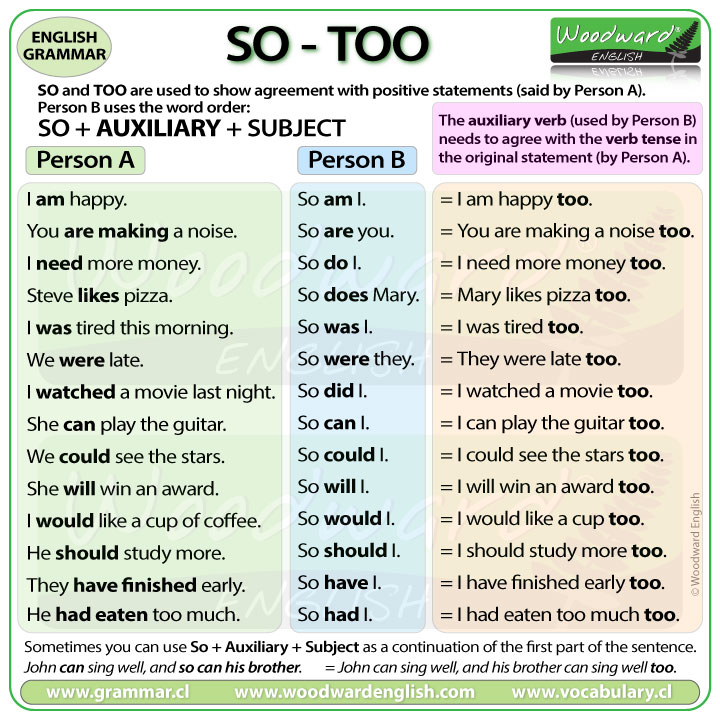 Videos lessons about TOO

You may be interested in the following videos about TOO: