Don’t and Doesn’t in English

This is an affirmative (or positive) sentence.

We do not say: I speak English. (NOT correct)
We say: I don’t speak English. (Correct)
We normally use Don’t or Doesn’t to make a negative sentence in the simple present tense.
Let’s look at the difference between DON’T and DOESN’T.

They speak Arabic.
They don’t speak Arabic.
You see that don’t makes the sentence negative when the subject is I, You, We or They.

Now let’s look at third person sentences using he, she and it. Again, we add doesn’t between the subject and the verb to make a negative sentence.

Notice how the letter S at the end of the verb in the affirmative sentence (because it is in third person) disappears in the negative sentence.
Why does this happen?
The verb after the negative don’t or doesn’t is the base form of the infinitive.
Remember, the infinitive is the verb before it is changed. To go, To need, To speak, To live … these are all infinitives which means that they are the original form of the verb before any changes. We know they are in the infinitive form because of the TO at the beginning.

Again you can see that in the negative sentence, speak does not have an S at the end because it is the base form of the infinitive.

Negative Sentences with HAVE and GO

Now let’s look at some verbs that change a little more.
The first one is the verb To Have.

But let’s look at the third person, for example with He.

Let’s make negatives sentences with the verb To Go.
To Go is the infinitive. Its base form is just Go.

We use Don’t and Doesn’t to make negative sentences in the simple present tense EXCEPT with the verb To Be and Modal verbs such as can, might, should etc. which we will see in another lesson.

There is no difference in meaning though we use contractions a lot in spoken English.

Complete the following sentences with don’t or doesn’t.

The answers appear in the video. 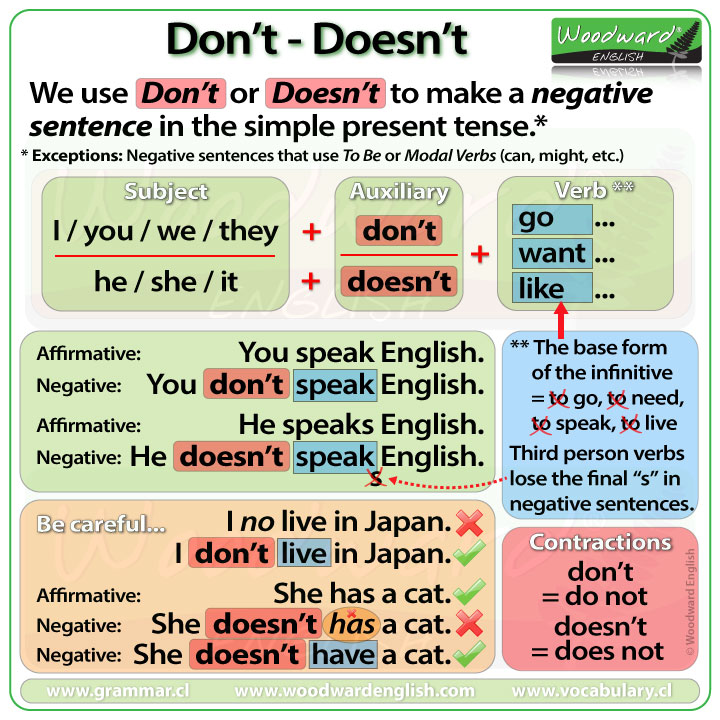