Before we look at like + verb-ing, we need to learn about infinitives.

How many verbs are here?
There are two verbs. Verb 1. want and Verb 2. sleep.

The verb sleep has the word TO before it. This means the verb is in its infinitive form: to sleep.
To + verb is called an infinitive. To sleep is an infinitive.

There are two verbs in this sentence. Verb 1. need and Verb 2. study.
The second verb is in its infinitive form… TO study.

The second verb (travel) needs to be in its infinitive form (to travel). He wants TO travel.

This is the general rule about two verbs together and there are some exceptions like with modal verbs but we will see this in another lesson.

With the verb LIKE there are two ways of putting a verb after it.
You can say:

But with the verb LIKE, we frequently use a verb ending in ING after it.

Sleeping is a verb ending in ING.
Another example. You can say:

Is there a difference?
In general there isn’t a difference in meaning, though we sometimes use the infinitive (TO + VERB) to talk about habits or choices.

However, using a VERB+ING is more common than using an infinitive.

BUT…. with the verb ENJOY, if there is a verb after it, we can only use a VERB-ING and NOT an infinitive.

After enjoy we have the verb ending in ING, in this case playing. We CANNOT say:

It is NOT possible to use enjoy + an infinitive.
Another example:

enjoy + verb-ing, in this case going. This is correct.
We do NOT say: 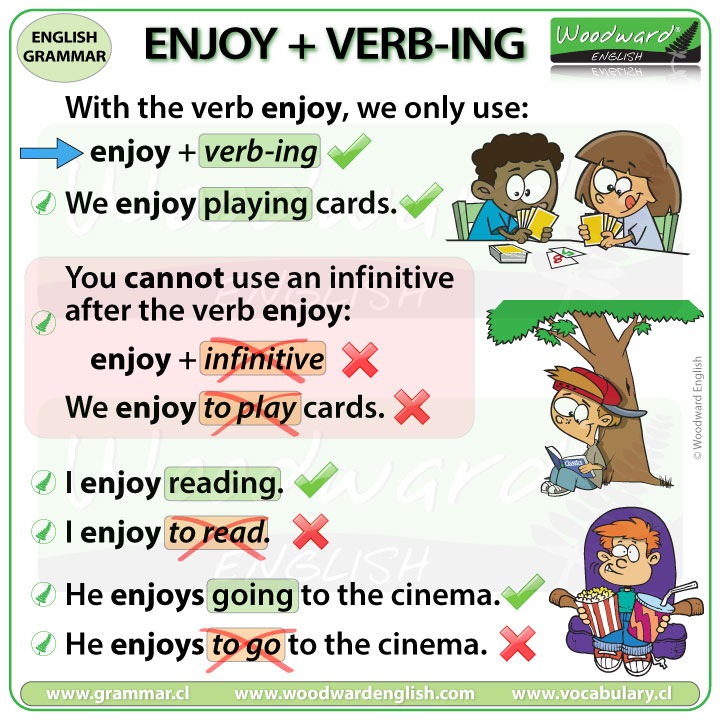 To make negative sentences we use the rules of DON’T and DOESN’T before like.

Remember there is no S at the end of the verb in negative sentences and questions.

To make questions we use the rules of DO and DOES at the beginning of the question.

To make a question with they we use DO at the beginning, so it becomes…

To make a question with she we use DOES at the beginning, so it becomes…

Remember there is no S at the end of the verb in negative sentences and questions. 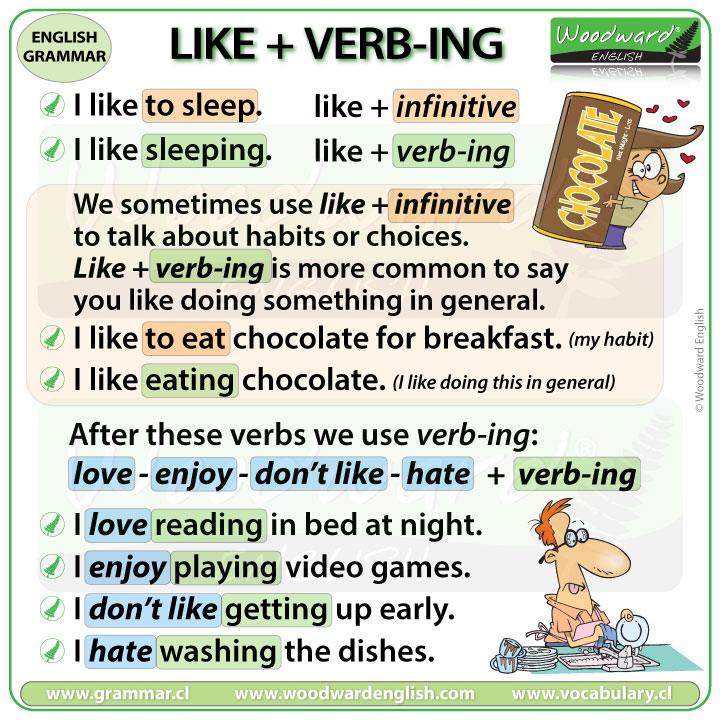