But for this person, SHE…. what do we say? We say…

For he, she, it we use LIKES with an S at the end.

Look at this sentence:

Yes, I work at a zoo, and I like snakes. This is an affirmative sentence.
How can we make this a negative sentence?

We use DON’T to make negatives sentences (in the present simple tense) when the subject is I, YOU, WE, or THEY. You put DON’T before the verb.

Don’t is a contraction of do not. You can say:

Now look at this sentence:

We use DOESN’T to make negatives sentences (in the present simple tense) when the subject is HE, SHE, or IT. You put DOESN’T before the verb.

Also doesn’t is a contraction of does not.
You can say:

Remember: NO S at the end of like in negative sentences.

For questions, we simply add DO or DOES at the beginning.

How can we change this into a question?
For I, you, we, they we add DO at the beginning to make it a question. It becomes…

And with this sentence…

How can we change this into a question?
For he, she, it we add DOES at the beginning to make it a question.

Again, there is no S at the end of the verb in questions.

Look at the following questions.
We can respond with short answers.

Answer these questions about you: 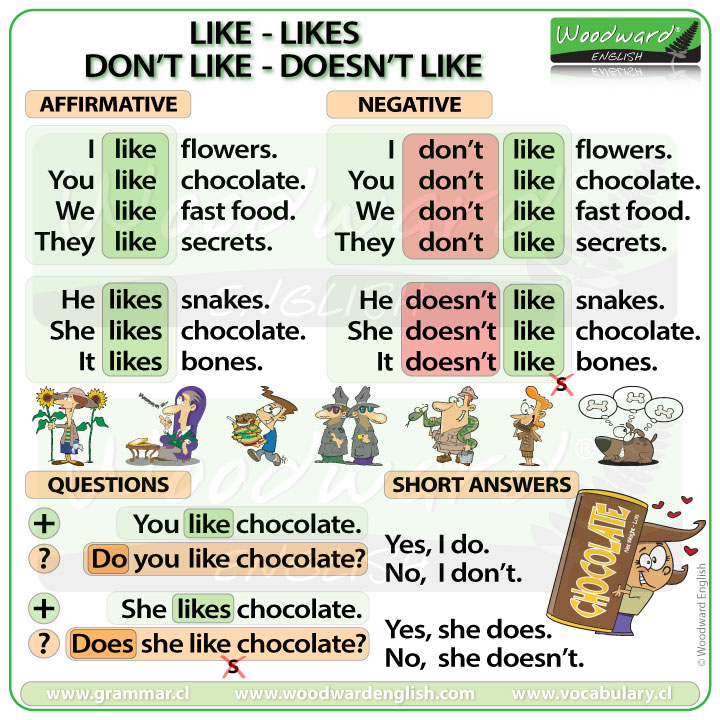