How to say an email address in English

How to say an email address in English – ESOL Vocabulary Lesson

This is a simple email address.
How can we say this email?

All emails have the @ symbol.
It is called the AT symbol.
When this appears in an email, we just say AT.

The other symbol here is called a DOT.
We don’t say point or period or decimal or full stop… No!
We just say DOT.

So, to say this simple email address, we say:

There are two main parts of an email.

The username … and the domain name. They are separated by the AT symbol.

Let’s look at the domain name first.
The domain name is the website address of a company or organization.
It ends in a DOT + something called a top-level domain.

These are five of the original top-level domains.

Now the above rules as not strict except for .e-d-u and .gov websites

Let’s read though the same email address but with different top-level domains.

Now, there is another type of ending, for example .nz (dot n-z)

Here are some examples of country top-level domains.
.br (dot b-r) belongs to Brazil
.es (dot e-s) belongs to Spain … it is ES because the name for Spain in Spanish is españa … which starts with ES. That is why sometimes the two letters may seem different to the country’s name in English.
.in (dot i-n) belongs to India
.mx (dot m-x) belongs to Mexico and as we have already seen…
.nz (dot n-z) belongs to New Zealand.

Notice how we said each letter individually.

Sometimes the domain name has an extra dot as in this example:

How do we say this email address?

The UK part at the end refers to the United Kingdom.

How to say the username of an email

The username is a unique name associated with that domain. Sometimes it contains someone’s name, like in this example:

You can see the username has a first name John and a surname Smith. This is quite common.
In this case the username also has a dot between the two names. Sometimes there is no dot.
Let’s say this email.

Sometimes you have to spell the name or username because it may be difficult to understand. You can easily say each letter individually. For example:

Sometimes in a username you may see this:

That line at the bottom between the first name and the surname is called an underscore.
How can we say this email address?

Sometimes in a username you may see this:

That line in the middle between the first name and the surname is called a hyphen OR a dash.
Both ways of saying it are correct.
How can we say this email address?

Now, a username is not always a name or surname. It could be anything and can contain a mixture of letters and numbers and the other things we have already seen.
Look at this example:

This contains a dot, an underscore and a hyphen or dash in the username.
How would we say this email?

Notice the pronunciation of G in gmail in our video.

With this information you can now pronounce any email in English. 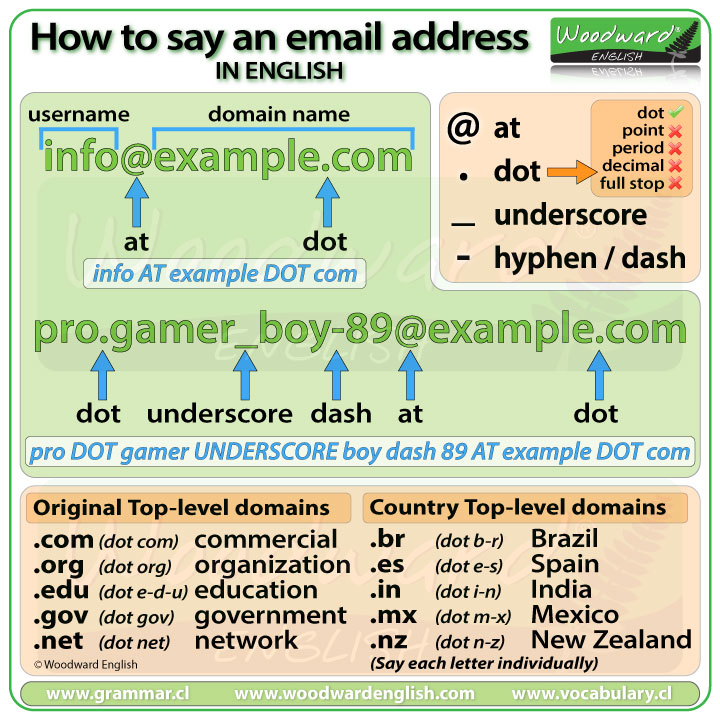