This ESOL lesson explains how to use the verb To Agree in English.

To agree = to have the same opinion about something.

It is important to remember that agree is a normal VERB. It follows the same rules as other verbs in the simple present tense.

For third person (he and she) we just add an S to the end.

Notice how we DO NOT say:

A common mistake for people learning English is when they use To Be with the verb To Agree. That is because some speakers of romance languages (Spanish, French, Italian…) have a habit of using To Be when agreeing in their language.

That is because they don’t have the verb To Agree.

So, what is the negative from of To Agree?

As with normal verbs in the present tense, we add don’t or doesn’t to make it a negative sentence

For third person (he, she, it) we use doesn’t instead of don’t.

Remember, there is no S at the end of the verb in negative sentences.

Again, for negative sentences we do NOT use the verb To Be before the verb To agree. This is a common mistake.

Another way of saying I don’t agree is I disagree.

How do you make a question using the verb Agree?

As with normal verbs in the present tense, we us DO or DOES and the beginning to make a question.

Past tense of Agree

What is the past tense form of this verb?

For affirmative sentences, if…

For the third person we also use the same form of the verb in the past tense. For affirmative sentences, if…

The auxiliary DIDN’T shows us that the negative sentence is in the past tense. The same happens with third person subjects…

And finally with questions we just change Do or Does with Did.

We will see more about the past tense in another lesson. 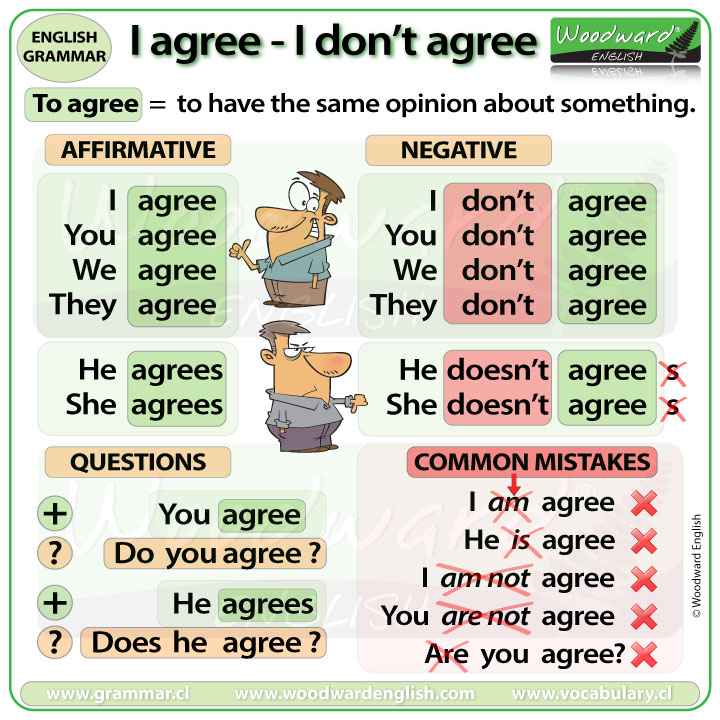