They’re vs. Their vs. There

What is the difference between THEY’RE and THEIR and THERE?

Their, They’re and There sound the same in English. Words that sound the same are called homophones. It is a common mistake to misspell these words in written English, even for native English speakers because they sound the same. However they have different meanings.

What is the difference between Their, They’re and There?

They’re is a contraction of they are.

THEIR = a possessive adjective. It shows possession, that something belongs to some people you are not talking to right now.

Examples of other possessive adjectives are MY, YOUR, HIS, and HER:

My book, your book, his book, her book, their book.

THEIR is used for a group of two or more people that are not with you right now.

The noun after their can refer to a thing (or person) that these people have.

Mother and teacher are NOT possessions! They are something that you have.

THERE = Not here. In that place, not this place.

There is the opposite of here.

THERE IS / THERE ARE = Something exists.

When THERE is followed by IS or ARE, then it means that something or some things exist.

There is + singular noun (or uncountable noun)
There are + plural noun 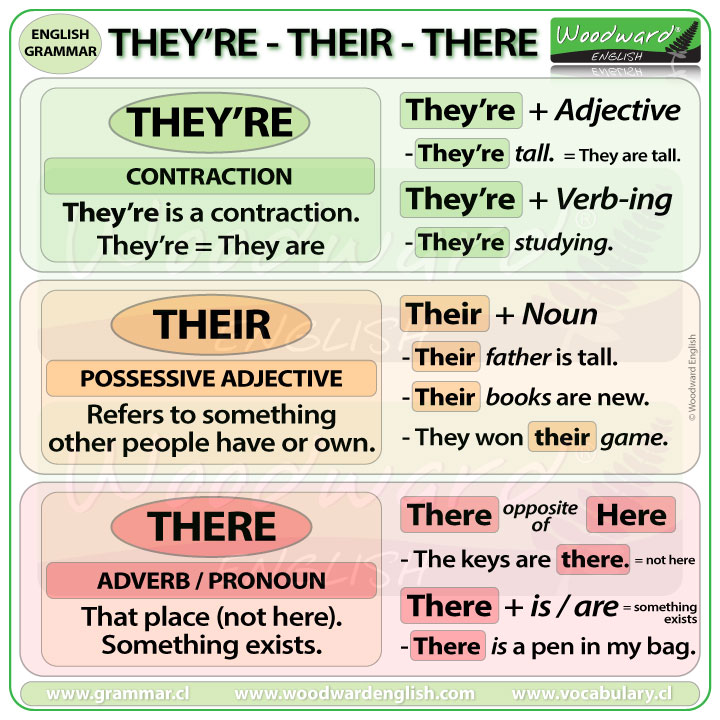 THEY’RE, THEIR and THERE in the same sentence

In this sentence, we can replace They are with the the contraction They’re.

Where are they reading their books?

They are not reading there books here. They are reading their books over there.

This is an example of They’re, Their and There in the same sentence:

The first THEY’RE is a contraction of THEY ARE … the second THEIR is a possessive adjective (showing they have something) and the third THERE refers to the place they are reading which is not here.

How do we know when to use THEIR or THEY’RE?

It depends on the next word or words.

We use Their + Noun (usually a thing or person/people)

NOTE: There is no article before the noun.

Sometimes there is an adjective before the noun.

IMPORTANT: we do NOT add an S to the end of their with plural nouns.

They’re = They are … is often followed by an adjective.

They’re = They are … can be followed by a verb ending in -ING.

They’re = They are … can also be followed by a plural noun.

More examples of THEY’RE vs. THEIR

Can you see the different uses? 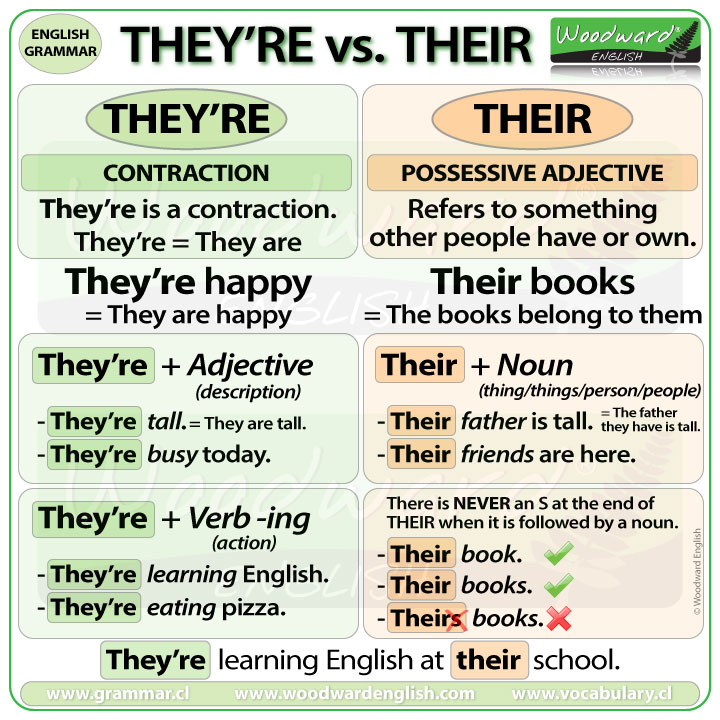 How can I remember the difference between THEY’RE and THEIR?

1. Replace THEIR with MY.
If it sounds correct then THEIR is correct.
If it doesn’t sound correct, then you need to use THEY’RE.

THEIR happy.
MY happy. (Sounds WRONG) … It needs to be THEY’RE happy.

2. Replace THEY’RE with THEY ARE.
If it sounds correct then THEY’RE is correct.
If it doesn’t sound correct, then you need to use THEIR.

THEY’RE cars.
THEY ARE cars. (Sounds WRONG) … It needs to be THEIR cars. 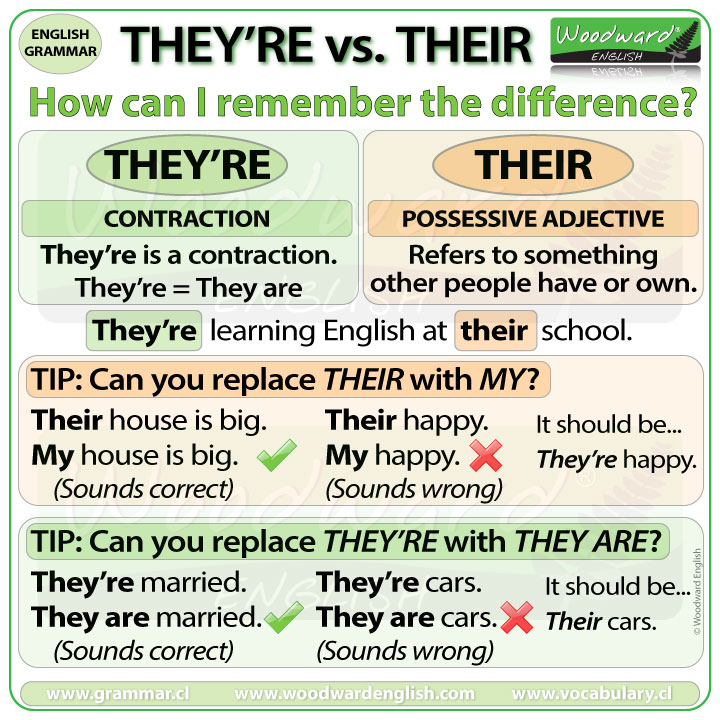 The difference between They’re, Their and There is a common mistake even for native speakers in written English so don’t worry if you find this difficult at the beginning.